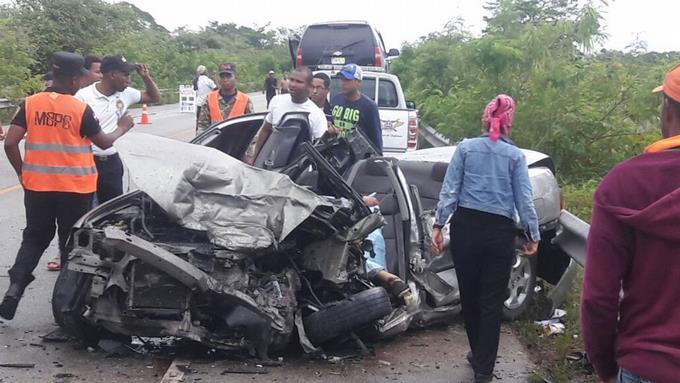 The five key risk factors that lead to injuries and deaths in traffic accidents are excessive speed, alcohol consumption, non-use of a seat belt, misuse of the child seat, and non-use of the protective helmet on the motorcyclist.

These factors were highlighted by Dr. Ramón Leonel Ureña, director of the Traffic Accident Mortality Reduction Program (PREMAT) of the Ministry of Public Health, who called the attention of the population on the need to act with restraint and respect the traffic laws to avoid unfortunate outcomes.

The risk factors were pointed out by Ureña as part of the national road safety “Christmas Safe 2019” day. The campaign is a program through which the agency intensified the promotion of and highlighted preventative actions through educational efforts that include placement in market squares and other massive points of crucial information about the consequences of reckless driving.

The day aims to raise awareness among the general population about the importance of prudence and precaution in transit and reducing deaths from accidents. It included a workshop for the 911 transport units and the chauffeurs of the Ministry of Public Health; placement of preventive banners throughout the perimeter of the institution; captioned photographic exhibitions, are placed in squares, universities, and hospitals concerning the subject.

Ureña further explained that motorcyclists contribute 67 percent of traffic accident mortality and hence the importance of informing them in this regard.

He said that alcohol is the one that causes more deaths due to traffic accidents during the Christmas season, hence the importance of discretion and discipline in avoiding alcohol whenever driving is in the plans. “When you are under the influence of alcohol, you lose skills, reduce vision, dexterity, and can fall asleep while driving.”

Deaths due to traffic accidents increased by 50.9% in the Dominican Republic in the first six months of 2019, with a record of 996 at the scene, compared to the same period of 2018, when the report of the Observatory of Citizen Security certified 660 deaths. This without counting the deaths that occur in hospitals. The year 2018 closed with 1,418 deaths due to traffic accidents ‘in situ.’

According to the Pan American Health Organization (PAHO), the consumption of alcohol per capita in the country is 6.9 liters. That is above the world average, and driving under the influence of alcohol is a crucial risk factor for 27 % of all road injuries.