Romeo Santos, Rafael Solano and other Dominicans as “The most creative in the region,” according to Forbes 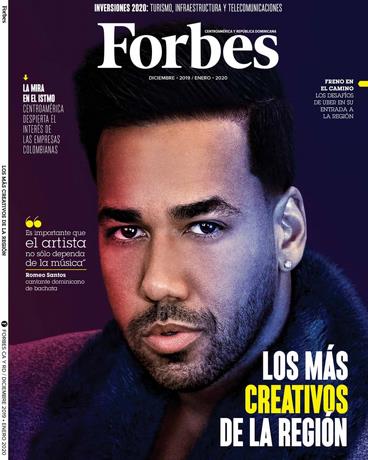 “Romeo Santos is the exponent of the bachata with the most massively attended concerts and has done much experimentation with that characteristic rhythm of the Dominican Republic,” Forbes cites in the article.

In the interview conducted for the December 2019 – January 2020 edition, “El Rey de la bachata” (the king of the bachata) relates that today’s creativity arises in various ways. Sometimes he enters the studio with an idea already conceived and other times he only wants to compose and is locked in the studio he has in his house.

Romeo, who began writing songs at age 13 influenced by Dominican exponents such as Anthony Santos, Raulín Rodríguez and Frank Reyes, said that although he has a very broad musical taste, his heart is bachatero.

The star of bachata stressed that although creativity is very important, there are other elements to take into account: “The creative part is the engine of everything, we artists also surround ourselves with a lot of things that are important, such as marketing, advertising, having charisma on stage, there are many factors, but I believe that creativity is where it all begins,” said the artist to the magazine and considered that the image is an element that pushes success in the career of an artist.

Similarly, the representative of Dominican origin said that he has made good investments and stressed that it is important that artists not only depend on music so that they can leave a good future for their children.

In the article, Romeo talks about his origins and how he started with the Aventura group.

Another Dominican who adorns this edition of Forbes is the composer Rafael Solano, who 50 years ago wrote the song “Por Amor,” considered the most international Dominican song.

The magazine highlights the creative and inspiration of the teacher Solano when composing. “In the creation, the experience and influence of what others have done are conjugated, even if one does not want to accept it, it is not that one copies the others, but that it is to go along the path that they have traced us,” said Solano.

The artistic producer Alberto Zayas is another of the local talents to be included in the list. Forbes points out the great shows that Zayas has created and the recent achievement of “A record couples ‘merengue,” held last November with 440 couples dancing meringue in the colony area and breaking the Guinness record that Russia held since 2013.

Other Creoles on the selective list are Juan Luis Guerra and Nathalie Hazim.