700 Haitians are repatriated daily in the border area 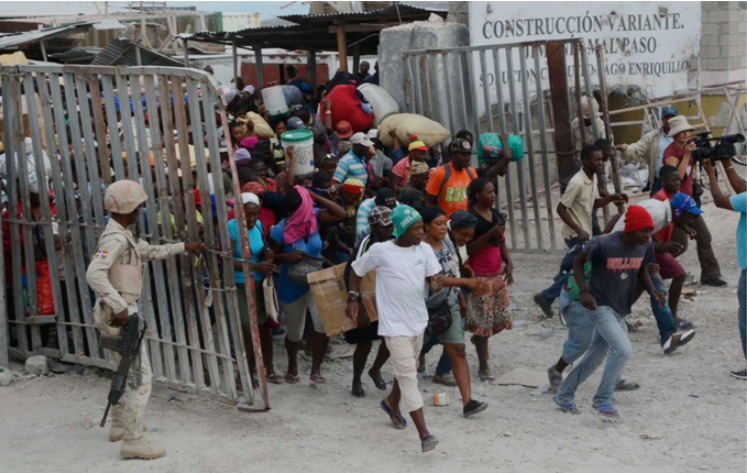 After Christmas, the income of Haitians rises. PHOTO: ADRIANO ROSARIO

The general commander of the Army of the Dominican Republic, Estanislao Gonell Regalado, said yesterday that they reinforced the provinces that border Haiti with members of the National Police and naval and area units in the north and south, which will guarantee the low flow of Haitian migrants.

The general added that so far this month they have repatriated around 300 to 700 Haitians daily in the four main points: Jimaní, Dajabón, Elias Piña, and Pedernales.

The general stressed that the entry of migrants into the country for these Christmas dates are massive, but that they will only be able to enter legally.

“We will prevent the Haitians from always entering our country at the end of the year and at the beginning of the year, only those with their documents will cross,” said Gonell.

He labeled the crisis in Haiti as “a delicate situation” while reporting that the markets in the border area are not inconvenient.

“Everything arises normally… there is a good flow and good sale of each one, both Dominican and Haitian; right now the border is totally calm,” said the commander.

On the border fence, there are usually 600 men, who will be duplicated with members of the National Police and the other institutions of the armed forces.

A total of 9,700 soldiers will remain until the end of January in the southern and northern part, which will ensure that Haitians do not cross into the country illegally during the end of the year and the new year, according to information provided by the general.

In addition, he said that the border is maintained without any inconvenience so far and that border markets operate normally, given the situation facing neighboring Haiti.

In late August of the year, 2019 hundreds of Haitians took to the streets to protest the lack of fuel. This generated a series of uprisings and vandalism in the country. Haiti was plunged into a serious political crisis that forced the authorities to close schools and other public institutions—the already suffering tourism was further impacted.

The political opposition calls for the resignation of the current president, Jovenel Moise, whom they accused of corruption. However, the president does not give indications of abandoning power.

Foreign Minister of Foreign Affairs of the Dominican Republic, Miguel Vargas, said last December 11 that: “It is necessary to prevent Haiti from falling into a spiral of total chaos, from which it would take years to recover. The major emergencies focus on food insecurity and health problems.”

In addition, Vargas said that the instability of the Haitian territory hinders the aid provided by international organizations. He also added that approximately four million Haitians go hungry.

In November, the International Monetary Fund (IMF) indicated that the crisis in Haiti is unprecedented.

Repeated blockades in the country between 2018 and 2019 have negatively impacted the country’s economy, increasing inflation to 20 percent.

Neighboring Haiti remains in a state of uncertainty for the year 2020 and without indications of improvement.