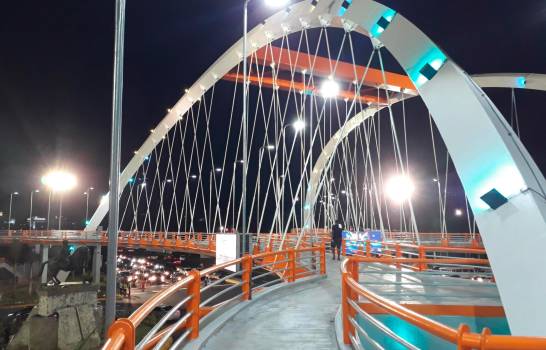 The bridges are brighter and safer. (FREE DIARY)

The Minister of Public Works, Ramón Pepín, announced a rescue program for the pedestrian bridges of the National District and the province of Santo Domingo, to restore ease of use to citizens.

During a supervisory tour by the pedestrians of Máximo Gómez Avenue with John F. Kennedy and February 27, the official said that they started with these two structures because they are the most used by citizens.

He indicated that the investment in these two works is about 60 million pesos because they were completely remodeled, but also the arborization, landscaping and lighting were updated so that people are not afraid to use them during the nights.

He informed that within the next year’s budget of the ministry he directs, an important (not specified) resource item was contemplated to rehabilitate all pedestrian bridges and restore people’s confidence to use them.

“We ask users to take care of this great work, great investment has been made in terms of economy and labor. The Ministry of Public Works will continue to work on pedestrian bridges because we all deserve a safer city,” he said.

He said that many pedestrian bridges are used only during the day because at night they have no lighting and people are afraid to go over them to avoid being a victim of crime.

He stressed that young glass cleaners and vendors on the pedestrian bridge of Máximo Gómez Avenue with John F. Kennedy have voluntarily united in the work of cleaning and maintenance of the hygiene of that structure.

He argued that the biggest problem with these structures is that people urinate in the bases and that totally destroys iron.

In addition, the Minister of Public Works, Ramón Pepín, urged citizens to take care of these works not only because of the cost it represents for the State by way of taxpayers but because they are very necessary for the pedestrian traffic of citizens who deserve a safer city.