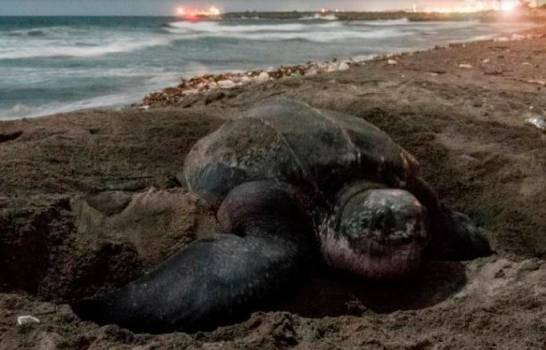 The turtle of the tinglar or lute species seen on Manresa beach, in the National District. (DIARIO LIBRE / MARVIN DEL CID)

A journalistic work by Marvin del Cid entitled “The world’s largest turtle nests in Santo Domingo” and which refers to the tinglar or “Leatherback” species, seen in Manresa beach and with a length of about two meters of shell and a weight of more 600 kilos, was the most read in the Environment section of Diario Libre.

The subject of turtles is one of the most frequently treated Cid for this newspaper. Because of the depth with which he deals, the journalist has obtained national and international recognition.

Marvin del Cid also wrote and directed the documentary “Cacú, a change for life,” whose production is also from Diario Libre and which tells the story of five fishermen from Manresa beach who went from predators to conservationists at the hands of the marine biologist Omar Shamir Reynoso.

Cacú has traveled around the world in different film festivals by obtaining the Grand Prix of the Green Vision Environmental Film Festival in St. Petersburg Russia and finalist at the Biennial of Scientific Cinema in Madrid and at the Icaro Festival in Central America. In addition, the United Nations headquarters in New York was presented in 2018 on the occasion of World Turtle Day.

The Leatherback species reach their sexual maturity between 9 and 15 years and can live between 100 and 150 years in a natural state.

Followed by the report “World’s largest sea turtle nests in Santo Domingo,” in terms of content most visited by readers, the articles “Meteorology issues alerts for hurricane and storm conditions at the passage of Dorian” and “A vortex toroidal over Santo Domingo This causes panic.