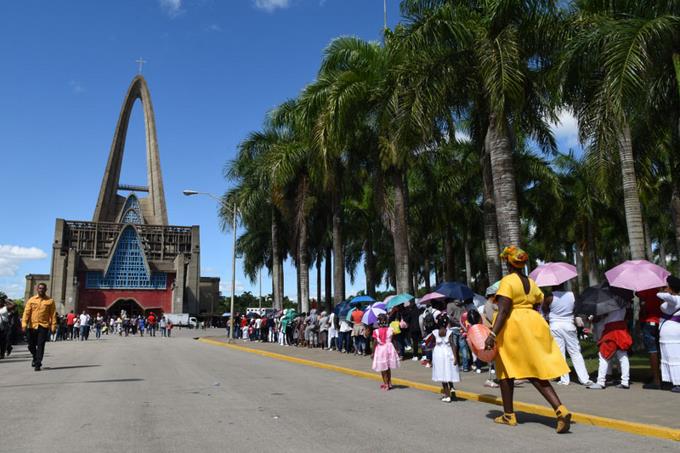 The Basilica of Higuey welcomes thousands of parishioners. ARCHIVE

President Danilo Medina asked the Virgin of La Altagracia to “intercede before God the Father, asking him to pour abundant blessings on every corner of our homeland.”

In a message on the occasion of the celebration of the Mother Spiritual Protective Day of the Dominican people, Medina said she joins the parishioners who pay devotion to the Virgin of La Altagracia, who she urged to take precaution and avoid unfortunate events in the road, given that thousands move to the Basilica of Higüey.

“I want to join the fervor of the parishioners who retain this devotion to the image of the Virgin Mary, in her invocation of Altagracia, consecrated as Spiritual Protective Mother of our people,” Medina said in the message released by the spokesperson of the Presidency, Roberto Rodríguez de Marchena.

He took the opportunity to invoke the Virgin Mother of the Son of God, to intercede before God the Father, asking him to pour abundant blessings on every corner of our country and to “help us strengthen the efforts for a better country and always keep our lives alive. ideals as a free and sovereign nation.”

The National Police reported that it deployed hundreds of additional police to provide security.

Miles to Higüey.
Thousands of Dominicans move today to the Basilica of Higüey to worship the Virgin of Altagracia, the protective mother of the Dominican people.

Celebration.
On this date, the Catholic Church celebrates a Te Deum attended by the main authorities and political leaders.