Earthquakes in Jamaica and Cayman cause alarm in the region 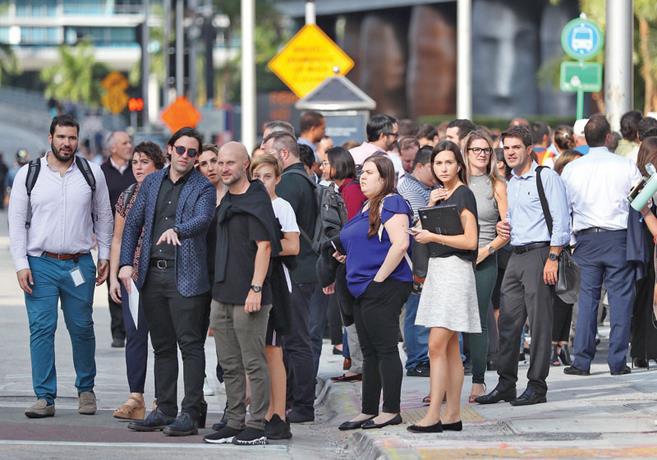 People wait outside after evacuating office buildings after an earthquake in southern Cuba, yesterday in Miami, Florida. AFP

A strong earthquake of magnitude 7.7 was recorded yesterday Tuesday at 120 kilometers from the northwest corner of Jamaica and 80 kilometers from southeast Cuba at the edge of the Caribbean Plate at 19.10 GMT, at a depth of 10 kilometers.

The quake was followed by a tsunami warning for Belize, Honduras, Mexico, Jamaica, Cuba, and Cayman Island. In these countries, the waves caused by the earthquake could reach up to one meter high at its shores. The United States Geological Survey explained that the earthquake caused strong tremors in the extreme west of Jamaica and was felt in much of the Caribbean area.

The Cayman Islands Government said it is unlikely that the Caribbean territory will be affected by a tsunami, although it warned of the risk of aftershocks.

The Cayman Islands Risk Administration (NIHM) asked the population in a statement that as a precaution they move away from the coasts and if they are in low areas evacuate or seek refuge in elevated areas.

For about ten minutes the authorities issued a tsunami warning for the Dominican Republic, following the earthquake that afternoon between Jamaica and Cuba of 7.7 degrees.

The director of the Seismological Institute of the Autonomous University of Santo Domingo, Ramón Delanoy, said that a tsunami warning was issued in the country because the magnitude of the earthquake warranted it until the data was well verified.

When asked if he has reports that the earthquake was felt in the country, Delanoy said no, but that the event occurred in the northern tectonic fault.

The portal of the Seismological Institute records at least 20 earthquakes in the Dominican Republic, being the highest of 4.3 degrees, the others range between 2.8 and 3.7.

The Office of Disaster Preparedness and Emergency Management (ODPEM) of Jamaica reported that there is no significant material or personal damage as a result of the earthquake felt on the Caribbean island.

EFFECTS
Jamaica.
The press details that the earthquake was felt strongly in towns such as Kingston, St. Andrew and Manchester, among many others.

Bahamas
Government buildings closed before normal hours due to tremors as a precaution.