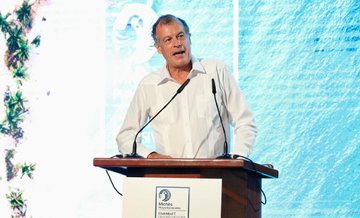 Hotel project was recognized as the most innovative of 2019

Henri Giscard d’Estain, president of Club Med indicated that the goal of the brand’s new commitment with the official opening of the Club Med Miches Playa Esmeralda is to offer the best of the best in a tourist destination that has political and economic stability, as is the Dominican Republic.

“Miches is a destination surrounded by natural beauty and tropical forest, extraordinary beaches, and others, and the country has security, political and economic stability, he emphasized.

He explained that the hotel, built with an investment of US 100 million dollars, will be the spearhead of Miches, since, “Like Punta Cana, the municipality of Miches is also doomed to success,” he said.

In that context, he recalled that Club Med was the first to bet on Punta Cana, currently the most visited destination in the Insular Caribbean.

Giscard d’Estain referred in these terms to participate in the official opening of the complex, which was attended by the main authorities of the country and the tourism sector.

It is recalled that Club Med Miches Playa Esmeralda was built in 18 months by Dominican companies Lombard, Aybar Espaillat, and  Therrestra, and was recognized as the most innovative hotel project of 2019.