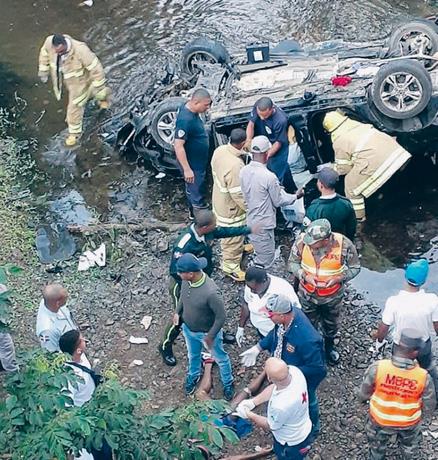 January has become one of the bloodiest months known to cause traffic accidents in the country.

According to journalistic records, at least 29 traffic accident deaths were recorded by the end of January, which continues to highlight the serious road problem in the Dominican Republic.

Only yesterday 12 people died in multiple road accidents that have occurred in different parts of the country.

In El Cajuilito, in Monte Plata, a gang of robbers composed of six individuals perished when the driver lost control on the “bridge of death” while fleeing at a rapid speed, after having perpetrated a robbery in a lottery shack.

Four of the deceased did not carry identification documents and only Oliver Contreras Mena, 25, Milagros Eunice Batista, 18, who lived in Santo Domingo Este and Sabana Perdida, respectively, were identified.

The prosecutor of Monte Plata, Felix Heredia, said that a firearm, cash, drugs, wigs, and tools were found inside the vehicle, used to violate doors and windows that, supposedly, were used by the criminals to commit the crimes. It was also reported that at the scene of the accident, Mrs. Miguelina González was presented, who identified a battery and other belongings allegedly stolen by the injured in a betting bank.

On the other hand, yesterday, Friday, five people lost their lives in a traffic accident in the province of Monsignor Nouel. The accident involved several vehicles.

The tragedy occurred on the Duarte Highway, near the Falconbridge (Falcondo) mining company. Among the victims were two employees of the Ministry of Public Administration (MAP), identified as Francisco Montilla, bus driver, and Mayra Minaya, also employed by the state agency. Juan Francisco Ramírez and two unidentified American doctors also died.

In another case, a motorcycle driver identified as Raulín Ogando lost his life when he was hit by a car on Núñez de Cáceres Avenue.

On January 9, a man, a woman and a girl died when a minibus hit the motorcycle on which they were traveling across George Washington Avenue in the National District.

On January 9, two people died and another was injured in a crash between two motorcycles in the Toro Cenizo community of the Villa Tapia municipality.

The deceased were Vicente Bernabé Gómez and Vicente Castillo, aged 17 and 39, respectively. The injured is Arianna García, who, due to the severity of her condition, was transferred to the trauma hospital Professor Juan Bosch, of La Vega.

On January 6, four people, including a child under five, died in a traffic accident on Fabio F. Herrera Avenue in Baní.