Vote for my guy or else: official 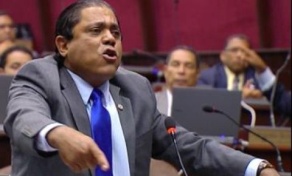 “Those who don’t support and work with me, for José Augusto Bueno, who is prepared, I Marino Collante, I will not accept that from anyone,” the veteran politico says in a video posted in the social networks.

“If they don’t work openly for José Augusto Bueno, be prepared,” the official said while banging on the table in front of dozens of leaders and supporters