The accounts that Medina has rendered in 7 years of government 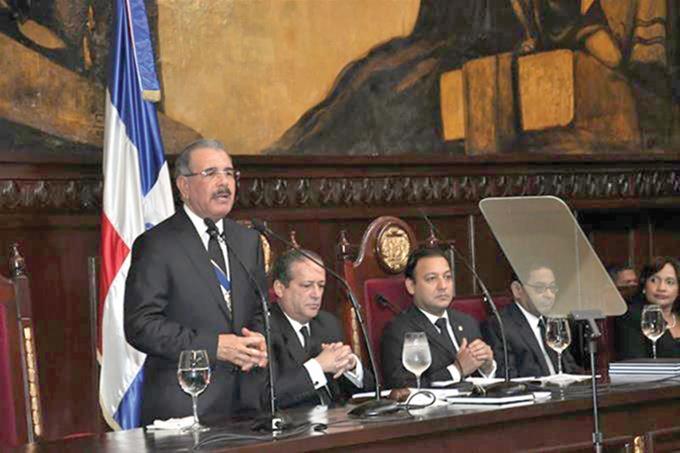 The events begin at 8:00 in the morning with the arrival of legislators and conclude with the military parade on the Malecon in the afternoon.

President Danilo Medina will hold today the last accountability of his second period of government during a ceremony to be held at 10:00 am at the headquarters of the National Congress.

During the day, Medina will deposit the reports corresponding to the government activities and accomplishments during the year 2019, before the joint meeting of the members of the Chamber of Deputies and the Senate of the Republic.

Last year, Medina went to the National Assembly to render the 2018 reports, where he summarized the achievements of almost seven years of government, announcing a series of measures such as raising salaries for public employees with a salary up to 30,000 pesos; laws, youth programs for first jobs, among others.

About 2017, Medina said there was progress in his fight against poverty and that the economy was at the service of the people. The president said that Dominican tourism continues to advance and that the country is heading towards the goal of ten million tourists by the end of 2023.

Medina said that “in 2017 we continue to pay continuous attention to the field and tour the country to support our producers.”

President Medina guaranteed that anyone who has committed illicit acts in the case of bribes of 92 million dollars that the Brazilian company Odebrecht admitted to having paid in the country to organize the construction of millionaire works between 2001 and 2014 will be submitted to justice.

“I want, please, to be heard well: There are no sacred cows in this government, nor will there be sacred cows outside of it while I am the President of the Republic. I assumed a commitment to God, to my family, to my country, to the people, to this Congress, to my party and to the memory of our founding fathers and I will not betray him,” said the head of state.

In 2016, the year of social pressure by youth organizations and civil society, the president referred to the issue of the fight against corruption and transparency On February 27, 2016, he went to the National Assembly Hall where the main topic was that of Bahía de las Águilas, from which he said the land was recovered.

On the same date, but in 2015 he presented to the senators and deputies the issue of the regularization of foreigners, which benefited basically Haitians, whom he had proclaimed, were affected by sentence 168-13 and which forced a National Regularization Plan. In 2014, the National Literacy Plan was the topic that generated the most interest.

In 2013, his first accountability, Medina received “a rain” of applause among those attending the National Assembly Hall when he gave an “ultimatum” to the Barrick Pueblo Viejo mining company to renegotiate the gold mining contract in Cotuí and especially with his phrase “gold belongs to the Dominicans.”

The president asked the executives of the Barrick Pueblo Viejo to agree to review the fiscal aspects of the mining contract they have with the Dominican State because in that scheme of the income distribution, after the rise in gold prices in the world market it was unacceptable to continue with those margins.

“So far we have been patient. But patience has a limit. And more for a government that is on the street every day and sees the urgencies of a greater investment of resources drawn on the faces of our people, which allow them to improve their living conditions,” said the president.

The President announced that the government had completed the National Police Reform project and that in the second week of March of that year it would present the National Citizen Security Plan to the population.

The head of state said that “from the bottom of my heart I know the pain and concern of many families” who have been victims of violence and crime in the streets of cities and communities in the country.