Rains mainly in northern provinces due to frontal system 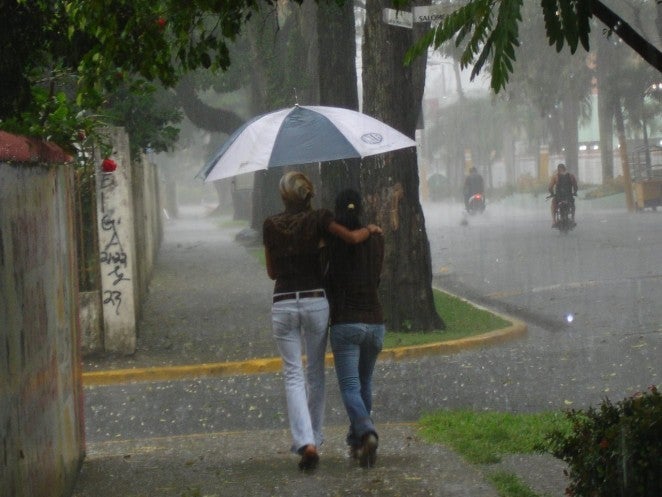 Today during the morning hours, a cloudy sky is forecast with the occurrence of scattered rains, which could be locally moderate to strong, isolated thunderstorms and gusts of wind throughout the Atlantic coast, Cibao Valley, Central Cordillera, border area and the northeastern region, due directly to the arrival of a strong frontal system into our territory. Therefore, during the afternoon and evening, there will be rainfall continuing with downpours, thunderstorms, frequent gusts of wind which will simultaneously extend to several provinces from the southeast, east and southwest parts of the country.

For Monday, although the frontal system will be located over Puerto Rico, gradually moving away from the country, sufficient humidity will remain that will be combined with the instability contributed by the trough at different levels of the troposphere, producing clouds with scattered downpours being moderate to strong locally in much of the national geography, most frequent in the northwest, north, southeast, Central Cordillera and border area regions.

On Tuesday, the withdrawal of the trough is expected, however, rains will continue to occur, but of less intensity and frequency, especially in the north, northeast, southeast, Central Cordillera and border area regions, due to humidity lags and the northeast component wind.

Due to the expected rains, ONAMET maintains the following levels of meteorological ALERT to 9 provinces, in the face of possible urban floods, landslides, as well as overflowing of rivers, streams, and ravines.

The 9 provinces on alert

Temperatures will experience a significant decrease from today at night/early morning and early hours of the morning, being pleasant to cool, especially in the Atlantic Coastal coast and mountain areas, due to the direct incidence of the cold environment that predominates behind the frontal system and the time of year.

As for the maritime conditions, as of today, the waves will begin to deteriorate on the Atlantic coast, being able to reach up to 9 feet high, in that sense, it is recommended that fragile, small and medium-sized vessels should remain in port, due to dangerous waves and frequent gusts of wind.

Summary: Frontal system will leave significant rains mainly in provinces of the northern region of the country. Nice to cool temperatures at night. Dangerous waves on the Atlantic coast mainly from the afternoon and evening. Weather alerts are maintained.

Today: Cloudy with scattered rains, which will be moderate to strong, possible thunderstorms and wind gusts, during the morning hours over the northwest, north, Central Mountain Range and border areas, while in the afternoon the rains will spread to provinces of the southeast, east, and southwest.

Monday: Mostly cloudy with moderate to heavy downpours, thunderstorms and wind gusts sometimes in much of the country, more frequent towards the northeast, northwest, north, Central mountain range, Caribbean coastal coast, and the Central Mountain range.

Santo Domingo and its municipalities: Partly cloudy to cloudy with downpours and thunderstorms.

National District: Partly cloudy to cloudy with downpours and thunderstorms.

Tuesday: Partly cloudy to cloudy with scattered showers, which could be moderately local and possible gusts of wind over several provinces of the northeast, southeast, north, Central mountain range and the border area, in the afternoon.

Santo Domingo and its municipalities: Partly cloudy to cloudy with scattered showers in the afternoon.

National District: Partly cloudy to cloudy with scattered showers in the afternoon.