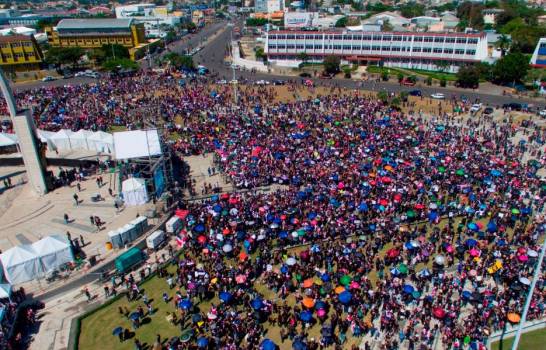 The echo caused by the slogans that thousands of young people shouted in the Plaza de la Bandera showed that there is power in their calls and their claims can be heard by the authorities.

What began as a simple demonstration of several young people, on February 17, one day after the suspension of the elections, traveled thousands of kilometers to the ears of compatriots who were in international waters. In New York, Miami, France, and Spain, dozens of Creoles drew their flags to support those in Plaza de la Bandera.

Their authority can also be felt in the March 15 elections if they decide to vote massively. In the register of the Central Electoral Board (JCE), there are 2,949,117 voters with ages ranging from 18 to 35 years. That represents 40.2% of the register, which covers some 7,443,636 voters distributed in the 48,442 square kilometers of the national territory.

Protesters, belonging to the millennial generation, will influence the election of 3,849 seats: 158 mayors, an equal number of vice mayors, 1, 164 councilors and their alternates, 235 directors and deputy directors and 735 members.

After success with Trabucazo 2020, the protesters will organize their fighting strategy and will remain pending to the Board, whose electoral entity they set points to take into account for future votes, such as the identification of electoral prosecutors and a co-management with International organizations

They asked to identify who is going to do the electoral prosecutors in the different provinces and municipalities of the country in the next elections that will take place on March 15.