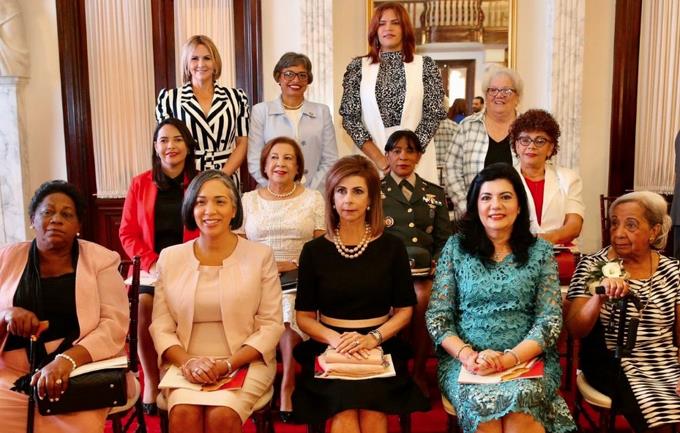 The president of the Republic Danilo Medina awarded the Medal of Merit to volleyball player Prisilla Rivera, to the judge of the Supreme Court of New York, Lourdes M. Ventura, and to 11 other Dominican women who have excelled in categories such as sport, politics, justice and the arts.

The thirteen merit medals were awarded through Decree 98-20, which grants them in recognition of their outstanding roles in Dominican society.

Medina presented the medals to Patricia de Moya, in the business line for her first product, Mercado Magazine, a publication that leads in the Dominican Republic the print segment in business magazines. Also recognized was Mary Kasse for her political work that has allowed her to occupy various positions until she reached membership in the PLD Central Committee since 2000.

In sport, Prisilla A. Rivera Brens, captain of the Caribbean Queens, was recognized for being part of the National Volleyball Team since 2001.

In the Legal Professional line, Mercedes Lora was honored, considered one of the lawyers who best know the laws related to the guarantee of women’s rights.

Honored as a professional in sciences, was Agripina Ramírez, who currently has the only Ph.D. in the Dominican Republic in Biodiversity and Environmental Management.

While Rhadys Iris Abreu Blondet, was selected in the Legal Professional line, for her performance as judge of the Inter-American Court of Human Rights from 2007 to 2012 and her diplomatic career in the Ministry of Foreign Affairs.

Colonel Ana Matos, first in charge of Gender of the Navy, received the merit as a military professional for contributing from that role in promoting the role of women in the Armed Forces and in adapting military uniforms for women.

For her community work, Tamarah Santana was chosen, considered a selfless woman; she has dedicated most of her life to improving life in her community, through the different initiatives she has implemented throughout her 23 years of work.

Enlightened Virgin Conception received the credit in the rural master line for her work of transmitting her knowledge to the new generations of students, teachers in service.

In the philanthropic Labor line, she received the Gianni Paulino medal, which promotes an active and participatory old age, since she understands that people can and should integrate and not stay in the corners of the houses.

María Altagracia Tejeda was chosen in the Rural Woman line because of her search for well-being for her community. She has participated in the creation of cultural spaces such as Yokamba Academy; It impacts more than 300 children and adolescents with limited resources.

Germana Quintana received recognition in the Arts line. Her career began more than 45 years ago. She has been a winner on several occasions of the Talía, El Dorado, Casandra, and Soberano awards.

As a leading professional in the diaspora, Lourdes M. Ventura was selected, who, on January 1, 2020, became the first descendant of Dominican emigrants to hold the position of Judge of the Supreme Court of the State of New York, in the 11th District Queens County Judicial.

“She was born, raised and has lived almost all her life in Queens, but says she is more Dominican than a banana and knows our culture very well, which she loves infinitely. Ventura has served as a director of several professional organizations in New York and is an emeritus member of the Advisory Council of the Dean of the University of Buffalo Law School and arbitrator of the Association of Arbitrators for minor claims,” the Presidency of the Republic published.

The Dominican president, the first lady Cándida Montilla de Medina, and the vice president of the Republic, Margarita Cedeño de Fernández presided over the ceremony.