“There is no justice in the Dominican Republic, because the judges are sold,” says Ramfis Trujillo after the decision of the TSE 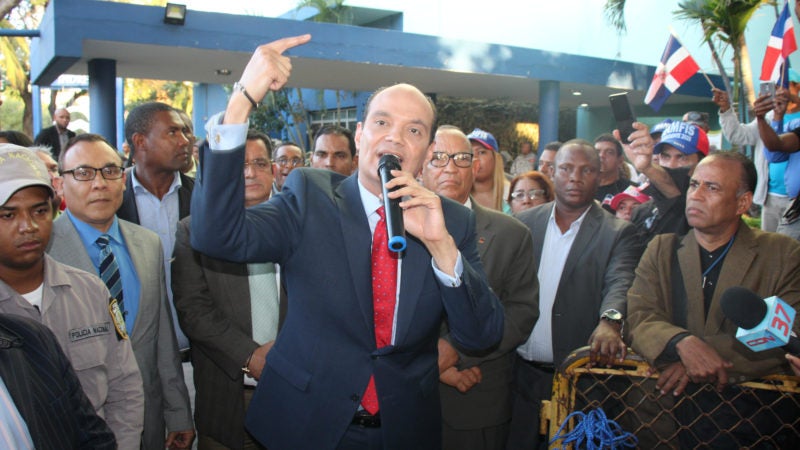 “There is no justice here in the Dominican Republic because the judges are sold. The judges impose criteria that they are sent to impose. Here we see another run over, but we will continue because this does not end here.

The Dominican justice banditry has to be terminated,” said Ramfis Domínguez Trujillo, the presidential candidate for the National Citizens Will Party (PNVC), addressing the supporters who were waiting for him on the esplanade of the TSE to show his support, after that by means of sentence TSE-352-2020, the judges of the Superior Electoral Court (TSE), headed by Román Jáquez, ratify the rejection of their presidential candidacy.

The attorneys Rafael Helena and Salvador Potentini stated that the shareholder (Ramfis) had been violated his fundamental right to equality, given that the electoral JCE had exceeded his duties, by requiring the shareholder (Ramfis) to comply with the provisions of Article 20 of the Constitution, when the other candidates were not required to do so. However, according to the ruling of the TSE, voted unanimously, the judges considered that his fundamental rights had not been injured.

In this regard, the legal representatives of Ramfis also complained that they were denied the 24-hour deadline to deposit an extension of their allegations, while previously they were granted the 2-day deadline requested by the Foundation’s lawyers, The Children of the Resistance, to regularize their voluntary intervention in the process despite the expedited condition required by an appeal for Amparo.

Domínguez Trujillo, who filed an Amparo action of extreme urgency, seeking approval, after the Central Electoral Board (JCE) denied it, by resolution 18-20, while the decision was made known, and before Jáquez finished reading the operative part of the sentence, along with his supporters, rose from their seats and as a sign of rejection of it, they left the room.

Questioning the legitimacy of the judges of that instance, Ramfis said that: “This has been a persecution for my last name, Ramón Jáquez was seen as a reflex from the first moment, showing an entirely prejudiced attitude, acting in an intolerant way with the lawyers ours and overly complacent to those who intended to oppose us.”

“It is a shame and embarrassment to see that we live in a country without justice, with biased judges imposing criteria imposed by the government and opposition sectors. Soon they are going to finish the game and we will demonstrate what it is to live in a true democracy; the corrupt will pay for their crimes regardless of whether they are judges selling their opinions or officials with their white-collar crimes,” said the candidate.