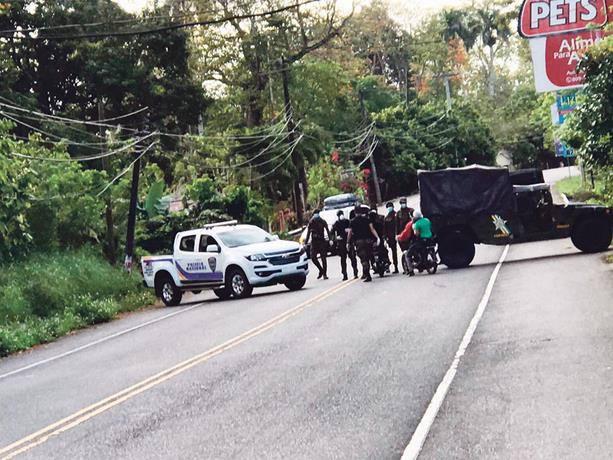 In order to contain the community spread of the coronavirus, authorities yesterday occupied the city of San Francisco de Macorís, preventing entry and exit as an emergency measure against the pandemic. ONELIO DOMÍNGUEZ / LISTÍN DIARIO

All the entrances and exits of San Francisco de Macorís were occupied yesterday by a contingent of military and police troops that have already restricted the movement of people and vehicles. In a measure designed to prevent the spread of the coronavirus, which until yesterday had already claimed at least 12 lives.

Only personnel from relief agencies, duly accredited media, and vehicles that distribute fuels, food, and medicine may enter the city.

The tension grew yesterday in San Francisco de Macorís when it was reported that the regional director of Public Health based in that city, Angel Federico Garbot, tested positive for the coronavirus and that he was transferred to a health center in Santo Domingo.

Contrary to previous days, in San Francisco de Macorís, almost all businesses were closed yesterday, and few people were on the streets, due to the existing police-military control.

Many people in the Duarte province say that despite what is happening in the area, many others resign themselves to staying in their homes, but that others are doing so only due to the existing surveillance.

Public Health authorities in San Francisco de Macorís explained that the situation is much more severe than anticipated.

In the morning hours, the streets looked almost desolate, and after two in the afternoon, the situation worsened.

Complaints
Many people complained that before 4.00 in the afternoon, military and police units reinforced the operations and that those who were talking on the fronts of their residences or the sidewalks were warned that in 30 minutes, they all had to keep themselves in their homes.

Residents of San Francisco de Macorís called interactive programs in that city and Santiago to denounce that what happens there is “a dictatorship.”

“My son and two friends from the University were arrested because they were talking in front of their houses at 7:00 at night in the San Martín neighborhood, in San Francisco de Macorís,” complained a lady who called the radio program “En el Mismo Blanco,” from Santiago.

Other people, however, consider the authorities’ measures to intervene in the Duarte province and part of the Northeast as positive. Still, they understand that they should be allowed to work, although with specific preventive measures.

The entrances occupied by the military and police forces are those that enter, connect, and exit to the Duarte highway to Santo Domingo and Santiago, Tenares and Salcedo, Nagua, and those that link to municipalities and municipal districts in the area.

According to the Ministry of Public Health, Santo Domingo, the National District, Santiago, and San Francisco de Macorís occupy the first through fourth places in numbers of cases of coronavirus.

But doctors say that the situation is much more difficult in San Francisco de Macorís, because its space is smaller than the first three cities mentioned and that there is more crowding there.

In this regard, the adviser and former president of the North region of the Dominican Medical College (CMD), Manasé Peña, said that concerning Greater Santo Domingo and Santiago, almost everything is distributed by area and that is why the agglomeration of people is less.

In this regard, he observed that due to the number of inhabitants of Santo Domingo, the National District, and Santiago, the cases of coronavirus in San Francisco de Macorís, compared to the population, individually exceed those verified in these three large Dominican cities.

They establish levels of isolation
The Duarte province, especially its principal municipality, San Francisco de Macorís, has become the first population hit by the impact of community transmission, with 59 confirmed cases and 12 of the 20 deaths that have occurred in the country, for 60% of registered deaths.

Testimonies of people affected and impacted by the death of a family member narrating the dramatic conditions in which they find themselves are increasing, and by different means, including health personnel who ensure that medical centers register a high number of those infected.

Of the 12 deaths that occurred in San Francisco de Macorís, nine patients were over 60 years old and had some chronic diseases, according to details released by the Minister of Public Health, Dr. Rafael Sánchez Cárdenas.

The authorities, supported by the country’s relief agencies of the municipality, with massive disinfections, including the Siglo XXl private health center, as well as the transfer of positives and contacts to isolation areas, expansion of treatment resources, and increased diagnoses.

The isolation, he warned, will extend to all the municipalities and provinces that are necessary, as well as the quarantines, curfew, and closure of cities and regions. On the other hand, Cardenas denied that the Villa Rivas patient was responsible for the community transmission focus.