The month in which life in the country changed 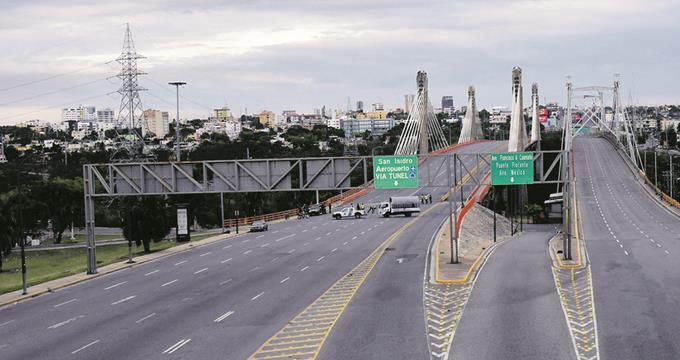 From Friday, March 20 when the curfew began until early Wednesday morning, 22,675 arrests of people who violated the curfew have been recorded. / JA MALDONADO 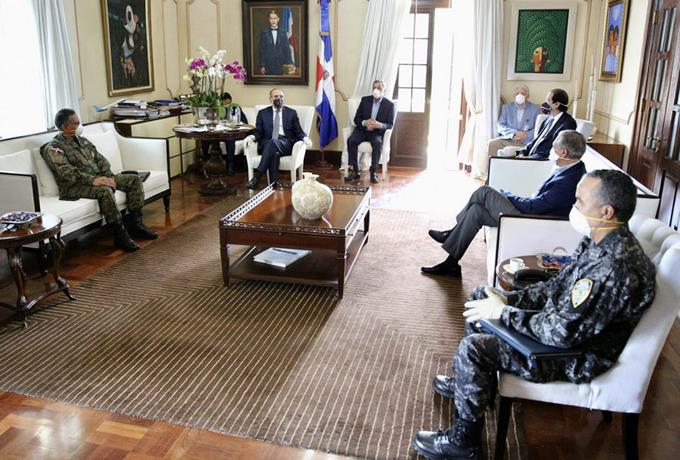 Thirty-two days after an Italian tourist tested positive for the first suspected case of Covid-19 in the country, which in turn triggered all the alarms of the health authorities, the anguish has gradually enveloped the population. The Dominican Republic who incredulously observes the death, as of today Tuesday, of 57 people and 1,284 infected due to the pandemic.

From the first registration of the Covid-19 in the country and, with the passing of the days, other positive cases such as the Canadian citizen and the Spanish national were detected, until finally, the pandemic achieved what everyone feared: circulation in the national territory with the Duarte province being the main source of contagion in the Dominican Republic.

This forced President Danilo Medina to speak to the country on March 17 to announce radical measures to combat the virus, as well as the request for a State of Emergency to the National Congress, which would be approved two days later, which would grant him the power to impose a curfew that expires this Friday, April 3.

As a result of these measures, most citizens have had to remain at home to prevent the spread of the disease. In addition, many have not been able to see their relatives for fear of infecting them during a visit, since some who have tested positive for the Covid-19 did not present the symptoms.

Non-food businesses and pharmacies have been forced to close their doors to prevent the pandemic that has paralyzed the planet and has plunged all humanity into terror by visions from Italy and Spain, who have been most affected by the coronavirus SARS-CoV-2 and the Covid-19 illness it causes.

In the mirror of those two nations, the other governments of the world have seen justification of the extreme measures taken to preserve the health of their fellow citizens.

Below we will present in chronological order the measures that the Dominican Government has adopted and the impact that these have had on citizens from the State of Emergency.

The Executive Power implemented the suspension of flights to and from European countries, China, Korea and Iran; as well as the provision of quarantine to passengers from other countries who have been in the last two weeks in any of the places with community circulation of the virus.

It was also provided that only private laboratories that are duly certified could carry out the test to detect the coronavirus, under the strict monitoring of the Ministry of Health, following the established protocols and promptly reporting the cases detected to the health authorities.

In addition, the establishment of more isolation centers necessary for health care.

The Government also proceeded to limit visits and movement of people in hospitals and clinics, which had to notify cases as established by the regulations of the Ministry of Public Health.

Among other measures adopted by the Government was the suspension of teaching in all school and university centers until April 13, in addition to the closure of all borders for 15 days, as well as the suspension for the same period of events and concentrations of all kinds.

In the case of border closures, entries and exits by land, sea and air were included for the next 15 days from last Thursday. Other provisions included the ordinance to public and private institutions on the reduction of personnel by 50% and the alternation of work shifts to prevent the spread of the coronavirus. 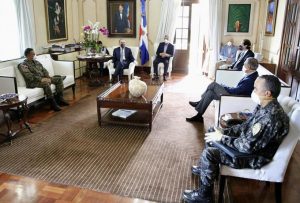 The Government decided to extend the curfew from 5:00 in the afternoon to 6:00 in the entire national territory until April 3.

The authorities declared a curfew in the country after the state had approved an exception prohibiting the transit and movement of people from 8:00 at night until 6:00 in the morning, from that date until Friday, April 3.

The Executive Power also ordered that health personnel be exempt from the curfew, people who go to a health center in emergencies and journalists and media personnel.

The president amended decree 135-20 so that during curfew hours, people and vehicles linked to the food, energy, water, telecommunications industry, ports, airports, and others are also allowed to circulate.

Furthermore, the Government indicated that public offices would have three categories according to the priority of the functions they perform.

He reported that there would be entities, in two categories, that would have to close their doors and activities to the public. In contrast, others would go to work with the minimum number of staff, which would operate and answer queries remotely.

Other measures taken are the closure of face-to-face operations to non-governmental entities that offer non-essential services, such as the Chamber of Commerce and Production, which will work virtually.

The Dominican Government ordered the closure of the following institutions that serve the public.

According to the resolution, the entities that closed were the National Aquarium, Mirador del Norte Park, General Archive of the Nation, Savings Bank for workers and Monte de Piedad, Training Center in Public Investment planning, among others.

The National Institute of Transit and Land Transport (INTRANT) reported that all its offices nationwide would provide service to users through non-contact channels until further notice, as a prevention measure against the spread of the new coronavirus COVID-19.

The Government ordered the prohibition of social gatherings, the confinement of people with the virus, and the guarantee of telecommunications.

The first established measure revolved around those who have tested positive for Covid-19: “It is necessary that people who test for the coronavirus remain confined and cared for in health centers, and that people who have been in contact with those infected remain in confinement for 14 days.”

The Minister of the Presidency, Gustavo Montalvo, also announced the prohibition of social gatherings in grocery stores and the consumption of alcohol within them.

He stated that the Dominican Institute of Telecommunications (Indotel) would prohibit the suspension or cancellation of services, as well as generate charges for late payment,

President Medina again addressed the nation and announced that for the next three months, the minimum monthly payment on the balance of credit card debt, as well as the default to be eliminated. Also, it ordered the Reserve Bank to lower the consumer interest rate with credit cards to 1 percent per month.

Medina reported that as of April 1, the 811,000 families who have the Solidarity Card who receive an average of 1,500 pesos per month, will have an increase from April 1 and until May 31 of the “Eat is first” component. They receive 5,000 pesos a month for the purchase of food and basic necessities in the Social Supply Network.

He expressed that the Government is also going to privilege the households whose heads are especially vulnerable to the coronavirus, for which they will be assigned an amount of 2,000 additional monthly pesos, thus totaling 7,000 pesos “for more than 350,000 households.”

“However, in addition to these families, I am aware that many more require this support network to face the economic difficulties that lie ahead. For this reason, we have identified an additional 690,000 additional families categorized as needy or vulnerable by the Single Beneficiary System (SIUBEN) so that they also receive this temporary support from the ‘stay at home’ program, said the president.

Medina assured that he had begun the process of joining 2,000 new businesses to the Social Supply Network to avoid any shortage of products and respond effectively to the increase in demand that these measures will generate.

He also announced to the economic sectors that have been temporarily suspended from operations by Covid-19, the Government agrees to deliver up to 8,500 pesos of the salary of suspended formal employees.

Also, it ordered that the economic commission work directly with these companies to provide coverage of a percentage of the salary, which can reach 8,500 pesos per month, so that they keep workers on their payroll, thus facilitating job stability and the income of hundreds of thousands of families.

The Central Bank approved to increase from RD $ 30 billion to RD $ 50 billion the amount of liquidity facilities to financial intermediation entities, through Repos up to 90 days and interest rate of up to 5% per year, using as collateral securities issued by the Central Bank and by the Ministry of Finance. These facilities may be renewed at maturity.

The additional RD $ 20 billion seek to guarantee that all financial intermediation entities have sufficient resources for the proper management of their treasuries and to contribute to the channeling of funds towards the productive sectors.

The High-Level Commission for the Prevention and Control of Coronavirus announced an agreement with the Agricultural Ship, a series of measures to help producers mitigate the effect caused by the pandemic.

Montalvo said that loans maturing from March 18 to May 18 would be extended from 60 to 90 days.

It announced that the period granted to the debtor for updating the appraisals of guarantees for credit support is also extended by 90 days.

Additionally, the Government decided to extend the curfew from 5:00 p.m. to 6:00 a.m. throughout the country until April 3.

The Superintendency of Occupational Health and Risk (SISALRIL) indicated that all patients who qualify and comply with the established protocol to undergo the diagnostic test of COVID-19 would be covered by the Dominican Social Security System (SDSS) as long as the epidemiological emergency is maintained, whether or not it is affiliated to it and its implementation is immediate.

Patients will receive a reimbursement from their private insurer or Health Risk Administrator (ARS) or the National Health Insurance (SENASA) through the Social Security Treasury, after auditing by SISALRIL.

The Government warned that those who make false news public to create panic and anxiety to the population would be persecuted.

Montalvo said that neither the National Police nor the Public Ministry would hesitate to apply the “sanctions established in our legislation to prevent a small minority that is not complying with the provisions from putting the health of all others at risk.”

During April and May, the Government will compensate with a special incentive of 5,000 pesos to all operational personnel from Public Health, the National Health Service, PromeseCal, the 911 System, the Armed Forces, the National Police, and the Emergency Operations Center. (COE).

“Doctors and senior officers of the Armed Forces and the National Police will receive this special incentive, worth 10,000 pesos,” said Montalvo.

The Minister of Public Health, Rafael Sánchez Cárdenas, confirmed that this entity recommends the continuation of the curfew that ends this Friday.

“We recommend the continuation of the touch of quietness from the Ministry of Public Health. It is essential for the maintenance of social isolation. It is necessary, and therefore, we maintain our call for this to be continued,” said the minister.

More than 22,000 arrests during curfews

From when the curfew began Friday, March 20, until early Wednesday morning, 22,675 arrests of people who violated the curfew have been recorded.

In the areas where more people did not abide by the curfew, they were in La Romana with 200; National District with 185; Baní with 156; Santo Domingo Norte y Oeste with more than 130.

The authorities recommended the population not to leave their homes to avoid the spread of the coronavirus.

“Against coronavirus, citizen responsibility is active, we have to accept and comply with all the recommendations and demonstrate that we are a mature and caring society. Do not leave home; together, we can overcome this pandemic and prevent its spread for the good of all.”