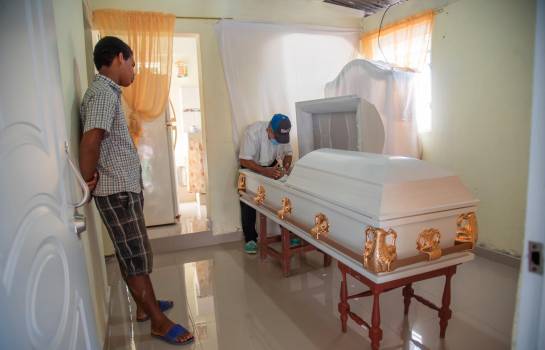 A relative mourns the death of José Leonardo Saldívar, one of those who died from adulterated alcohol consumption. (EDDY VITTINI / FREE JOURNAL)

Cases of deaths from poisonings of this type are recurrent in the country.

In the last five days, 13 people have died from the consumption of clandestine-made alcoholic beverages known as clerén, “Tapa Floja,” petrinche, or triculí. These are substances that are prepared by hand and are sold at low prices in the neighborhoods without any quality or purity control.

The last eight deaths from the consumption of these substances occurred between Thursday and Good Friday in the Los Girasoles and Pantoja neighborhoods in the western part of Santo Domingo. There the deaths of Francisco Montero, Manuel Montero, Pedro Martínez, Fani Díaz Minyetti, Juan Carlos Camacho, Juan Miguel Camacho, Fermín Darío Soto, and José Leonardo Saldívar were confirmed.

However, two days before those deaths, in the Brisa del Este neighborhood, in Santo Domingo East, similar cases had occurred when five people died after consuming cleric. The deceased are Luis Richardson, Félix Beltré, Odalis Villegas, Fermín Sánchez, and Ambiorix Sánchez. These last two were father and son, according to information from the hospital that treated them.

Although Francisco Moscoso Puello hospital staff reported that the deaths of Brisa del Este were caused by the consumption of clergy, a health report on the cases of Los Girasoles and Pantoja has not yet been released. The relatives of the victims say that they presented discomfort the day after they were drinking the artisanal drink known as “Tapa floja” that they bought in a grocery store for 100 pesos.

These deaths occur at a time when the country is experiencing a national emergency due to the COVID-19 coronavirus.

According to toxicological information from the Ministry of Public Health, clergy, triculí, and these other homemade alcoholic beverages are sold in bulk and consumed by low-income people due to their low cost. They usually contain methanol, which is the substance that causes massive poisonings that have been recorded and studied on other occasions.

In December 2017, the health authorities issued an epidemiological alert due to several cases of poisoning and massive deaths from the intake of contaminated beverages such as cleric and triculí.

On that date, in the municipality of Pedro Santana in the province of Elías Piña, eight deaths occurred due to the ingestion of cleric. This drink was acquired in a border community in Haiti. Two other deaths related to this type of alcohol occurred on December 23 in the Río Limpio community, which also belongs to the Pedro Santana municipality.

According to the Ministry of Health, people who are poisoned with Clerén, Triculí and other adulterated beverages have a clinical picture that can start within a few hours after ingestion, up to three days later, developing in three stages.

Weakness, dizziness, and nausea first appear. After an asymptomatic period, a second phase appears where vomiting, abdominal pain, disorientation, and blurred vision occur. Occasional blindness may also occur. In the third phase, very rapid respiration, neuronal injury, and seizures occur. If not attended to in time, the person may die.