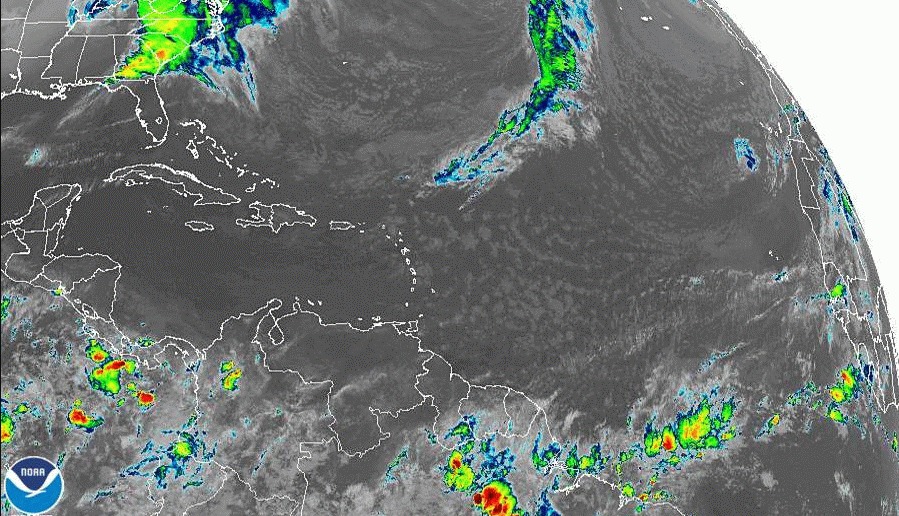 The weather conditions do not present significant changes since due to an anticyclonic circulation at various levels of the troposphere over our area, and the limited moisture content will result in low cloud developments and therefore significant rainfall will be limited. However, despite the fact that a frontal system is located in the north of the country, it will not affect local conditions since it will be moving east/northeast away from our territory.

Only a few short showers are expected towards the northeast and center of the country due to the cloud transport caused by the wind.

For tomorrow, Tuesday, the east/northeast wind will continue to transport some cloud fields in the afternoon with heavy showers in the northeast, southeast and Cordillera Central regions. In the rest of the area, we continue with little rainfall.

We will continue with a warm environment nationwide, feeling a maximum temperature that will reach between 32 and 34 degrees Celsius (90-93°F), being higher in some localities of the interior, due to the time of year.

This afternoon and evening: Isolated clouds and little chance of rain in much of the country, without ruling out some weak and isolated showers over the Central Cordillera (central mountain range), the border area and the northeast of the country.

Tuesday: Scattered clouds, with a slight increase in cloud cover and some isolated showers due to local effects on the regions: northeast, southeast, and Central Cordillera.

Santo Domingo and its municipalities: Partly cloudy at times.

Wednesday: Scattered clouds increasing at times with scattered showers in the regions: Northeast, Southeast (including Greater Santo Domingo) and the Cordillera Central.

Santo Domingo and its municipalities: Partly cloudy to cloudy at times with scattered showers.