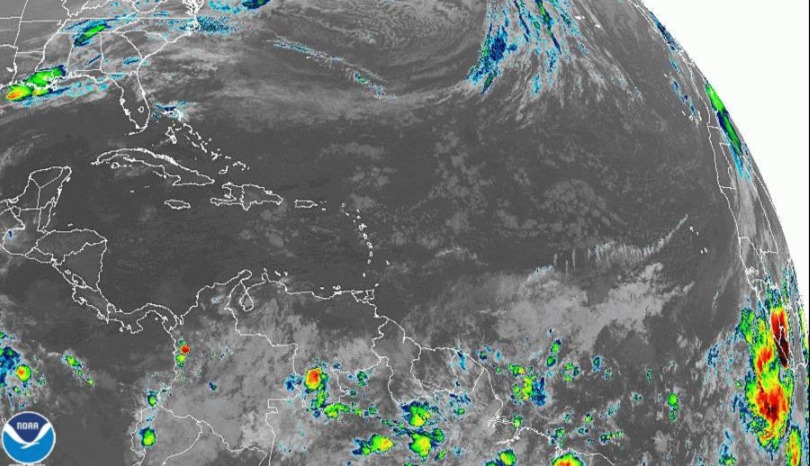 The incidence of an anticyclonic circulation prevails, which will keep significant rains reduced over the Dominican territory, however, the wind that keeps blowing from the east/southeast will draw cloudy fields towards the country, to cause some cloudiness and light rains towards the southeast, the Cordillera Central and the border area.

Tomorrow, Sunday, in the morning hours, scattered cloudiness and little chance of rain will remain. In the afternoon, the approach of a surface trough will slightly increase the activity of precipitation, generating clouds with scattered rains and isolated gusts of wind towards towns of the Northeast, Southeast and Central Cordillera regions.

ONAMET reports that due to the rainfall deficit that has been registered in recent months in many localities of the country, the population must make rational use of water.

Temperatures will be hot, especially in urban areas (max 32-34°C/90-93°F), due to the time of year and the warm east/southeast wind. ONAMET encourages people to drink enough liquids, wear light clothes, preferably in light colors, and not to be exposed to solar radiation for prolonged periods between 11 in the morning and 4 in the afternoon. Nighttime temps for the country will vary between 20-23°C (68-73°F)

Today: Partly cloudy to cloudy with some light rains to the northeast, southeast (including Greater Santo Domingo) and the Cordillera Central.

Sunday: Partly cloudy to cloudy with scattered rains towards towns in the Northeast, Southeast, and Central Cordillera regions.

Santo Domingo and its municipalities: Scattered clouds, partly cloudy in the afternoon with isolated showers.

Monday: Scattered clouds with increases in cloudiness in the afternoon and scattered showers over the regions: northeast, southeast, and the Cordillera Central.