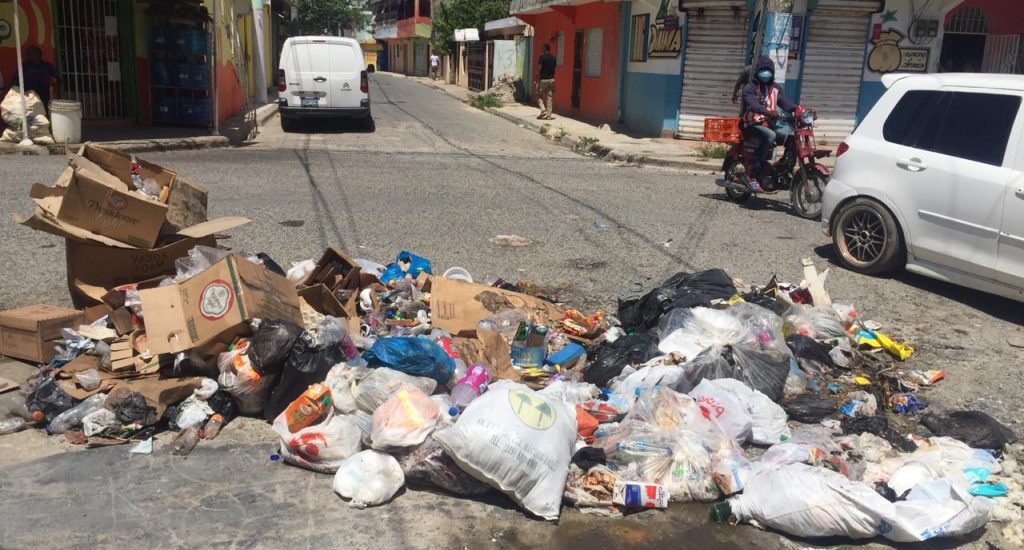 Due to the absence of the trucks the locals have had to improvise landfills on the streets. (Photo: Rafael Zapata).

SANTO DOMINGO EAST.- Residents on Teo Cruz and Yolanda Guzmán streets in the Los Frailes II sector, in Santo Domingo East, denounced this Saturday that they have been without drinking water for more than a month and a half and are not being picked up the garbage, a situation that they narrated has them desperate, knowing the situation that the country is experiencing due to the coronavirus.

In this sense, they made a call to the mayor of the municipality, Alfredo Martínez (El Cañero), and to the director of the Corporación de Acueductos y Alcantarillado (CAASD), Alejandro Montás, to provide a solution to this serious problem that affects them.

They expressed that it is counterproductive and inhumane that at this moment where the competent authorities themselves are recommending the population to use hygiene to prevent the spread of COVID-19, they are not receiving these basic services.

“We are very worried. We have been for more than a month and a half that a drop of water has not arrived and the sector is full of garbage on all sides, and that is the situation we have here,” said the president of the neighborhood council, Persia Berroa.

He added that due to the adverse situation that the community is facing, it is contemplating launching to protest the Las Américas Highway, to attract the attention of the authorities.

“They send us to wash our hands, but we wonder with what, if we don’t have water, a month and a half that we don’t get a drop of water,” he reiterated.

On his side, the citizen Francisco Guante considered it a shame for the aforementioned agencies that in the face of the health crisis the country is going through, this community does not have water and is full of garbage.

“It is sad and embarrassing that with a situation like this that we are experiencing we do not have what is called water,” said Guante.

In a tour carried out by El Nuevo Diario reporters in that sector, a large number of improvised landfills and dumps could be found, even in the middle of the streets themselves, which the locals have had to do due to the absence of collection trucks for this waste.

Some patios also look full of rubbish, and according to what those affected narrate in normal times they could pay to throw them away but due to the crisis that has left them without work and therefore income, they are unable to do so.

“If we were not going through this situation, I would have already paid someone to throw away those covers, but how can I do it, if what little you have is needed to cover eating?” said Rosario Sánchez.

While Mr. Hipólito Jiménez, owner of the Colmado Polín, said that due to the situation, he must pay 200 pesos every three days so that the garbage he accumulates in his business is thrown away.

The deaths in the Dominican Republic from the coronavirus amount to 217, while the number of infected rose to 4,335, as reported on Saturday, April 18 by the Ministry of Public Health.

Bulletin # 30 indicates that up to the time of the cut, yesterday Friday at 6 in the afternoon, 209 new cases had been recorded; 312 people recovered and 10,038 cases discharged.