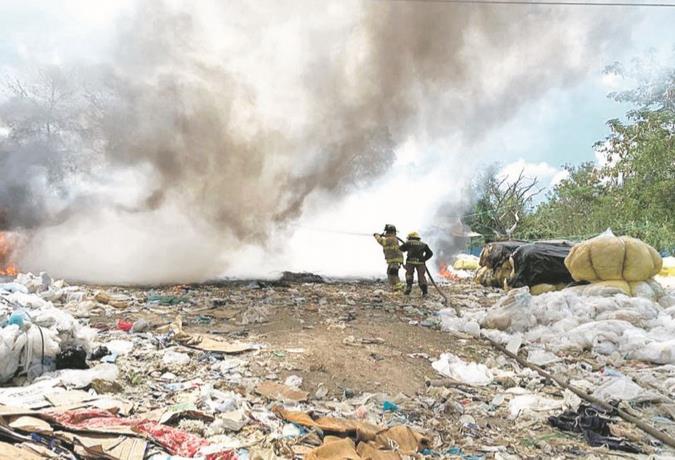 The Minister of Public Works, Ramón Pepín, stated that the fire at the Duquesa landfill is not accidental and that an investigation is warranted. GLAUCO CARPET

The Minister of Public Works and Communications engineer Ramón Pepín, affirmed yesterday that the fire at the Duquesa landfill is not the result of chance. President Danilo Medina has been informed minute by minute, attentive to the situation that affects the Municipalities of the Greater Santo Domingo and the National District areas.

“A landfill does not catch fire from all four sides at the same time,” said the official, after stating that the landfill for the garbage deposit has remained in operation and that at the same time the fire has been controlled.

“It was not a casual fire, what has happened here in Duquesa, that merits an investigation,” he said when interviewed while supervising the work that has been carried out 24 hours from the day the fire started in the landfill. Last Tuesday, Pepín noted that if a fire occurs in almost 100% of the landfill, that draws attention.

He urged the population to take all necessary measures in the face of any situation that may change the direction of the wind because the smoke will last for several days.

He said that whether or not the smoke affects the National District and part of Greater Santo Domingo depends on the direction of the wind and that, thank God, since last Saturday, the wind has been blowing in a south-north direction.

He also explained that it had been guaranteed that the garbage produced by the different municipalities of Greater Santo Domingo and the National District can be deposited and that the collecting companies continue with their work so that accumulations do not occur in the different sectors.

He argued that the complexity of the work is because it is not a landfill but a garbage dump and that the management it has had in recent months has not been the most appropriate.

A permanent camp has been installed in the area. Equipment such as bulldozers, shovels, backhoes, dump trucks, permanent men’s brigades, tank trucks, and rollers have been integrated into day and night work.