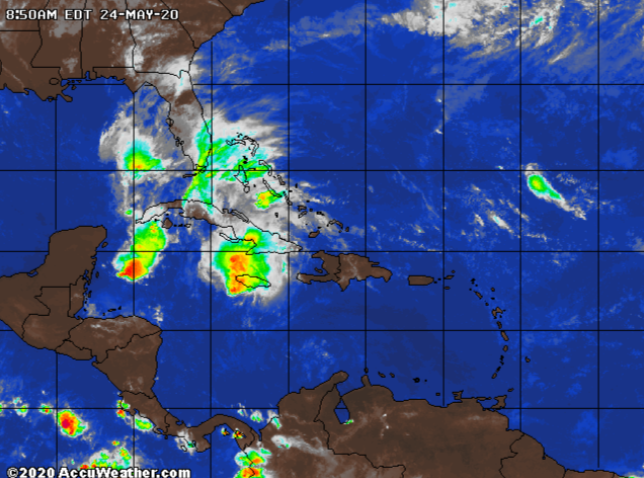 Today, in the morning, isolated cloudy skies will predominate with occasional increases as the day progresses and only a few short showers are expected over points in the southeast, due to the dragging of cloudy fields by the wind. Alternately, in the afternoon, towards towns in the north, northeast, southeast, northwest, Cordillera Central and the border area, we will have a mostly cloudy sky with moderate to heavy downpours, electrical storms and gusts of wind, due to the incidence of a trough present at various levels of the troposphere and its interaction with the local effects of daytime and orographic warming. In the rest of the country there will be scattered cloud cover and little rain.

For this Monday, a humid and unstable environment will prevail over our territory, due to the presence of a trough in the lower levels of the troposphere; this, in combination with the effects of the daytime warming cycle, will generate downpours and occasional thunderstorms in sectors located in the regions: northeast, the eastern plain, the border area, and the Cordillera Central.

Despite the cloudy and rainy weather expected in the afternoon, we will have a morning of cloud cover scattered throughout much of the country, so that the temperatures will remain hot, especially in urban areas, being cooler in mountain areas. It is recommended that you stay well hydrated.

ONAMET continues to recommend that the population adopt measures to guarantee the rational conservative use of water, due to the rainfall deficit that has been affecting our territory for the past few months.

Today: Scattered cloud cover in the morning hours over much of the country. Afternoon cloudy with downpours, thunderstorms, and gusts of wind over towns in the north, northeast, southeast, northwest, Cordillera Central, and the border area.

Monday: Humidity levels will be higher, so the trough will continue generating downpours, electrical storms, and gusts of wind towards the towns mentioned above.

Santo Domingo and its municipalities: Scattered clouds with occasional increases.

Tuesday: Because the trough will continue to affect our territory, these downpours are expected to continue with thunderstorms and gusts of wind over towns in the northeast, southeast, the border area, and the Cordillera Central.

Santo Domingo and its municipalities: Scattered cloudiness in the morning hours. Increases cloudy in the afternoon with showers.

National District: Scattered clouds in the morning hours. Isolated showers in the afternoon.