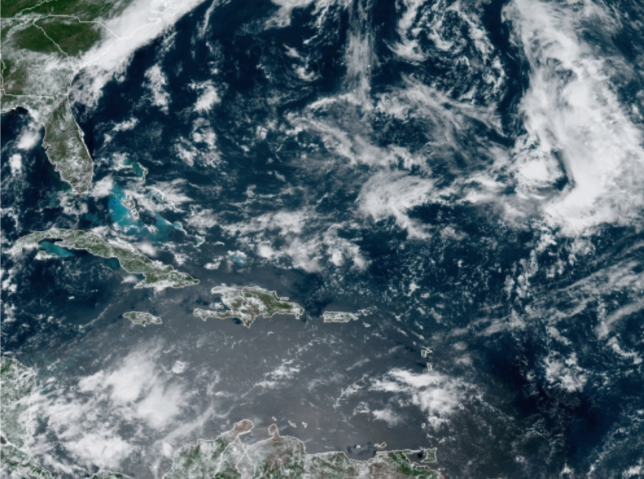 In the early hours of the morning partially cloudy with showers in the coastal areas of the southwestern region, but in the course of the afternoon there will be an increase in cloudiness with showers, thunderstorms and some gusts of wind in the eastern, southeastern regions, Northwest, border area, Central Cordillera and the Haitises, especially in the provinces of San Juan and Santiago Rodríguez, produced by the humidity provided by a trough located in the northern part of the country and the drag of cloudiness carried out by the east wind. Hot temperatures above 33 degrees Celsius in much of the national territory.

Tomorrow, Saturday, the trough will continue to affect the forecast area and, in combination, the east/southeast wind in the afternoon will increase cloudiness with moderate downpours, thunderstorms, and gusts of wind in the northeast, northwest, southeast and Cibao Valley regions.

On Sunday the trough will have moved away from the forecast area, however, a tropical wave will be affecting the weather conditions, causing moderate showers, thunderstorms and gusts of wind sometimes in the eastern, southeastern, southwest, northeast regions, Central Cordillera and the border area, with the highest incidence in the afternoon.

ONAMET, due to the high temperatures, maintains the recommendation to drink enough liquids, wear light clothes, preferably in light colors, and do not expose yourself to solar radiation for a long time between 11 in the morning and 4 in the afternoon.

National District: Partly cloudy in the afternoon with showers

Santo Domingo Este:     Partly cloudy in the afternoon with showers

Saturday: Partly cloudy to cloudy in the afternoon with downpours, thunderstorms in the regions: southeast, northwest, southwest, Cibao Valley, border area, and the Central Cordillera.

Santo Domingo and its municipalities: Partly cloudy with moderate showers and thunderstorms.

National District: Partly cloudy to cloudy with showers and thunderstorms.

Sunday: Clear in the early hours of the morning and partly cloudy in the afternoon with downpours, thunderstorms in the Northeast, Southeast, Southwest, Central Cordillera, and border areas.

Santo Domingo and its municipalities: Partly cloudy in the afternoon with showers.