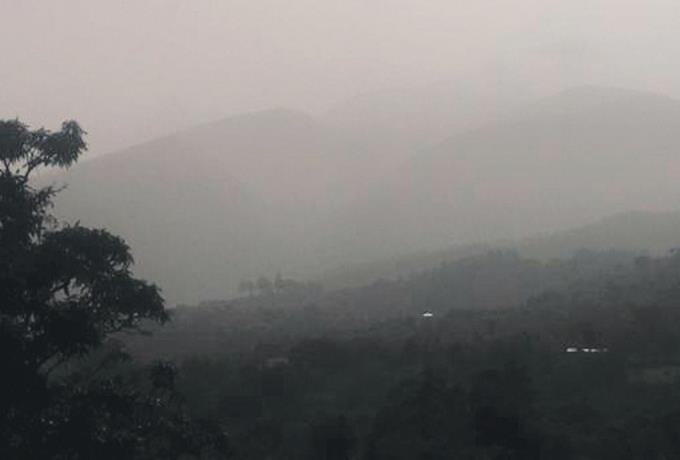 The high concentrations of dust from the Sahara yesterday hid the mountainous areas of the Dominican Republic, before the astonished eyes of the inhabitants of those areas. The haze grew more intense as the day wore on.

This was the experience of the inhabitants of the mountains that surround the Cambita Garabitos municipality of the San Cristóbal province, where, in the afternoon, the mountain range was completely covered by a blanket of clouds, smoke, or mist, as people described yesterday.

And the country will continue to experience an opaque and grayish sky, caused by the concentrations of dust from the Sahara, which added to the incidence of anticyclonic circulation, have raised temperatures.

The National Meteorological Office (Onamet) reported that dust from the Sahara will remain for the next 72 hours, just like the effects of an anticyclone, which is a high-pressure system that moves between 15 and 25 degrees south latitude.

The harmful effects of dust from the Sahara will continue to affect the Dominican Republic until Thursday.

As of that date, the first cloud fields and the occurrence of rainfall throughout the national territory are expected to begin to form.

This was stated by the meteorologist Henry Agramonte who explained that dust from the Sahara is combining with anticyclonic circulation to reduce rainfall, consequently producing high temperatures.

Incidence period
According to Dr. Roy Armstrong, professor of Marine Sciences at the University of Mayagüez, these aerosols do not originate exclusively in the Sahara desert, but in dry lakes in the northern region of Africa.

Armstrong explains that from January to May the aerosols travel further south -to Brazil- and serve as fertilization for the Amazon forest.

He adds that the movement of displacement continues between May and September towards the Caribbean, the eastern United States, and Central America. The peak months in the Caribbean are June and July.

Dust from the Namibian desert and dust from Asian deserts also penetrate the Caribbean. Dust from the Sahara arrives with a high load of biological compounds, such as “fungi, viruses, staph bacteria, mites, many of them pathogens, fecal compounds, pollen, heavy metals, and other pollutants.”

Therefore, Agramonte recommends taking advantage of the medical face masks that the population has been forced to use due to the COVID-19 pandemic and to reduce unnecessary exposure to the environment.

Provenance
The Sahara is the largest warm desert in the world located in North Africa and has a land area of ​​9,300,000 km2, territory comparable to that of the United States and China.

Its sediment is transported by tropical waves to the west, generating positive effects in some plant species, although it tips the balance more to the negative. In this regard, an investigation indicates that the Saharan soil is increasingly contaminated with human waste.

– Dust mass
Since this past Sunday, a cloud of dust from the Sahara desert has clouded visibility in the city and caused increased temperatures and respiratory conditions.