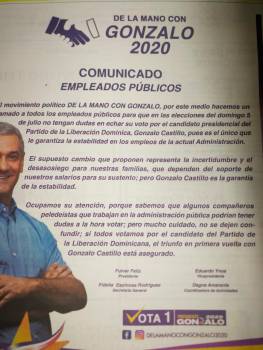 Santo Domingo.- In a veiled threat a campaign ad published Thur. cautions Gov. workers so that in the elections on Sunday, July 5, “bear no doubts to cast your vote for the PLD presidential candidate, Gonzalo Castillo, the only one that guarantees the stability of the jobs in the current administration.”

Paragraph 20 of article 173 of the electoral law considers an electoral crime to those who threaten, promise or agree, directly or indirectly, to separate or demote from their category or salary an official, public employee or private worker, or seek to be separate or downgrade or salary, with the purpose of influencing the determinations of said official or employee in the exercise of his electoral right.