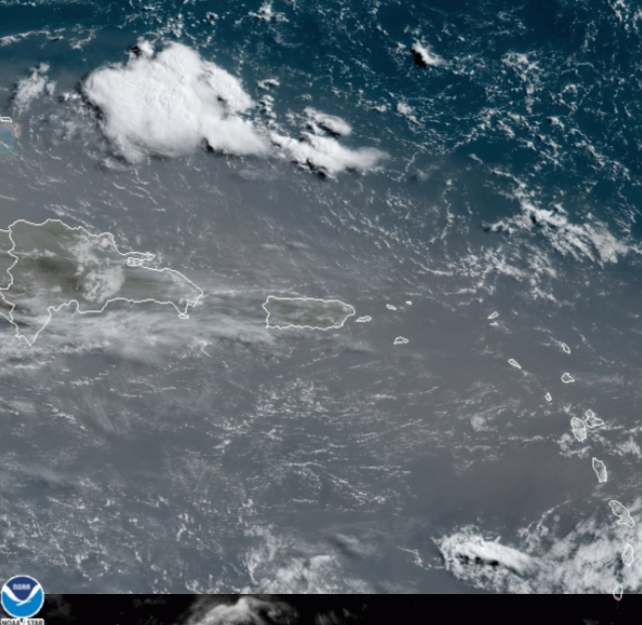 Summary: Vaguada will produce local downpours and thunderstorms in some parts of the country in the afternoon hours … Hazy sky due to the dust of the Sahara … Hot temperatures.

The weather conditions during the morning today will prevail with a slightly cloudy and grayish sky in much of the country, as a result of the concentration of dust from the Sahara and an anticyclone in the middle levels of the troposphere, despite this, in the afternoon there will be cloudy increases with local downpours, thunderstorms and possible gusts of wind in some points of the northeast, southeast, Central Cordillera and border areas, due to the influence of a high-altitude trough located in the portion eastern Cuba and the local effects associated with the daytime cycle, in the rest of the provinces there will be scattered clouds, hot temperatures, and little rain.

For this Monday, the beginning of the workweek, a gradual increase in the moisture content and instability in the air mass that covers us is expected, as a result of the passage of a tropical wave through our territory and the trough at various levels of the troposphere located over the country, therefore, there will be cloud developments accompanied by downpours, electrical storms and gusts of wind, observed from the morning hours and being more frequent in the afternoon and early evening hours, especially towards the southeast regions, southwest, Cordillera Central and the border area.

On the other hand, and due to the concentration of dust particles from the Sahara that has a light to moderate impact on the Caribbean area, including our territory, the population is recommended to take the necessary measures, especially those with respiratory problems.

ONAMET, due to the high temperatures, maintains the recommendation to drink enough liquids, wear light clothes, preferably light colors, and not to be exposed to solar radiation for long periods between 11 in the morning and 4 in the afternoon.

In the Dominican Republic, the rainfall deficit has continued for several months, therefore, we urge you to adopt measures that guarantee the rational use of water.

National District: Partly cloudy at times with some downpours and thunderstorms.