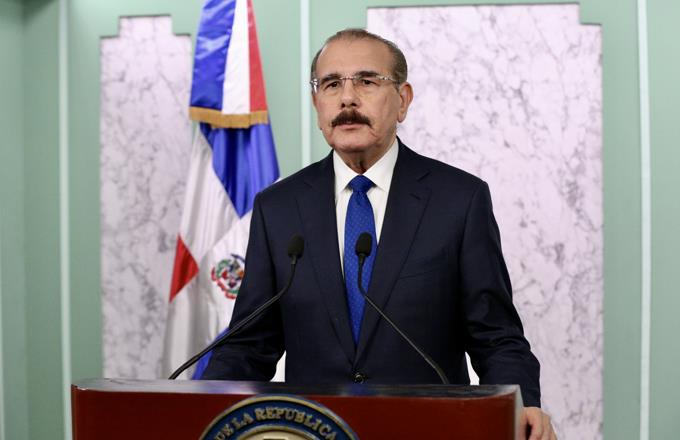 President Danilo Medina spoke to the country last night to announce the new phase of combat against Covid-19.

During a speech delivered last night to the entire country, President Danilo Medina called the Dominicans to go to the elections with the responsibility to prevent the virus from following the high rate of contagion.

President Danilo Medina said last night that the country will continue to face the coronavirus without a curfew, but will make an official declaration of a health emergency that will guarantee compliance with the provisions established by the World Health Organization (WHO).

Likewise, the head of state said that he will continue efforts to recover the economy affected by Covid-19 starting with tourism next Wednesday, he will continue to maintain assistance programs until August and the holding of elections, which he considered crucial.

New emergency
In an address he addressed to the country last night, Medina explained that the emergency will be issued by the Ministry of Health in the next few hours, covered by the General Health Law, 42-01.

“We understand that this is the appropriate way to continue advancing in the opening of economic activities in an orderly manner, without jeopardizing the progress we have made. The resolutions that the Ministry of Health will take will be announced in the next few hours and we understand that they are essential to preserving the life and health of the population, as is our vocation and responsibility,” he said.

New stage
He added that beyond these provisions, the most important thing in this new stage will undoubtedly be individual and family responsibility.

“Now more than ever, each one of us must become aware and, in every action of our day to day, take into account the consequences, both for their own health and for that of others. We cannot allow ourselves to be carried away by those who indolently, because they trust their good health or simply due to ignorance, ignore the recommendations. Believe me, no one is immune to this virus. And in this matter it only serves to take away from science, from what is proven,” said the president.

He emphasized to the citizens that they respect the rules, that they preserve life, that they take care of those they love the most, following the analogy of the driver, to always drive with caution and respecting traffic signals.

He asked that now that the country enters a new normal, not to throw everything achieved overboard, to continue taking care of themselves.

Extends social programs
Medina said that the Government will continue to provide support to those most in need, and for them, it once again extended the social plans and economic aid approved during the emergency period.

“In this way, we will continue with the PHASE I and PHASE II program, which supports companies and currently covers more than 866 thousand private employees, the Stay at Home program, which helps more than 1.5 million households, the Pa Ti program, which supports more than 200,000 independent workers and, of course, the Presidency’s food aid programs that are bringing hundreds of thousands of food rations to all corners of the country, will continue to be delivered on time to Dominican families until the last day of my mandate as President of the Republic,” Medina assured.

Recovery of the economy
Medina said that in the face of the fact that “there are still many Dominicans who need and await the reopening of their activities to survive and, of course, we want to help them do so.”

The leader pointed out that in the tourism sector “hundreds of thousands of jobs depend in our country, directly or indirectly, on this activity that has suffered strongly with the pandemic. For this reason, we have proposed that they begin gradually to resume their activities from July 1.”

He considered that this will bring relief to many areas of the country that live largely on tourism, but it will not be without risks.

“Therefore, in this new process, the solidarity of all is essential. Solidarity that manifests itself in due compliance with the rules,” said the president.

He said that despite the enormous budgetary effort that the situation entails because a decrease in state income is combined with an increase in expenditures; “Our Government is acting with the utmost responsibility. For this reason, we are guaranteeing the availability of sufficient funds so that the incoming authorities have the necessary economic resources to finance the proper functioning of the institutions and, in addition, to face the economic and social situation,” he added.

Well, in the complementary budget that the National Congress has just approved, the Executive Power is authorized to use financial instruments up to an amount of 150 billion pesos, to attend to the public spending caused by this crisis.

“Our Government will be leaving for the new authorities who will be sworn in on August 16, more than 100 billion pesos so that they can attend to the aforementioned needs,” Medina promised.

The elections
Medina said that the electoral day of July 5 will be a crucial day for the institutional life of the country because the President of the Republic and the representatives before the National Congress will be elected.

“Without a doubt, the impact of the coronavirus pandemic and all the events experienced in recent months have made this an unprecedented campaign in our country, in which candidates and supporters from all parties have had to adapt to new circumstances. and look for other ways to get their proposals to the population,” said the president.

He affirmed that because of everything experienced in February and March, these elections are “especially relevant for our society and for our democratic system.”

He noted that when there is only a week left until the day of the vote, it is important “that we all continue to do our duty and, once again, act with the utmost responsibility.”

He said that taking into account that proselytizing activities may be carried out over the next few days, “I also want to call on all leaders and all of society to send their message to the voters, but with due precautions, always thinking first in health, because the virus does not understand party colors.”

He asked that on election day, “we act according to the recommendations of the Central Electoral Board so that the day runs smoothly and calmly.”

He estimated that July 5 should become a date that “we remember as an example of our democratic maturity.”