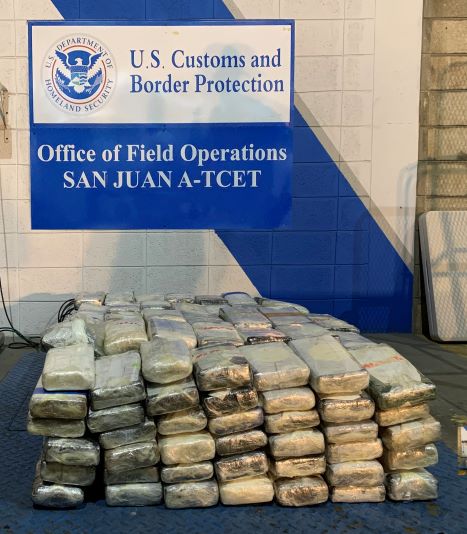 SAN JUAN, Puerto Rico – U.S. Customs and Border Protection (CBP) seized Friday 573 pounds (260 kilos) of cocaine inside a container on board the Santo Domingo – San Juan ferry.   The estimated value of the seized cocaine is over $ 7 million.

“Transnational Criminal Organizations continue to use the international supply chain to conceal narcotics within legitimate cargo”, stated Roberto Vaquero, Acting Director of Field Operations in Puerto Rico and the U.S. Virgin Islands.  “Our officers’ expertise, along with the utilization of all available tools, resulted in the detection of these narcotics.  Our communities can feel safer knowing that the men and women of CBP are securing their borders.”

On June 26, the CBP Contraband Enforcement Team inspected various containers arriving from the Dominican Republic on the M/V Kydon, observing various anomalies within a lowboy trailer.

After a more intrusive examination, officers found 231 packages of contraband, which field-tested positive to the properties of cocaine.

On June 10, CBP seized a load of 492 pounds of cocaine<https://www.cbp.gov/newsroom/local-media-release/cbp-san-juan-field-operations-seizes-492-pounds-cocaine-inside> inside a container also arriving from the Dominican Republic.