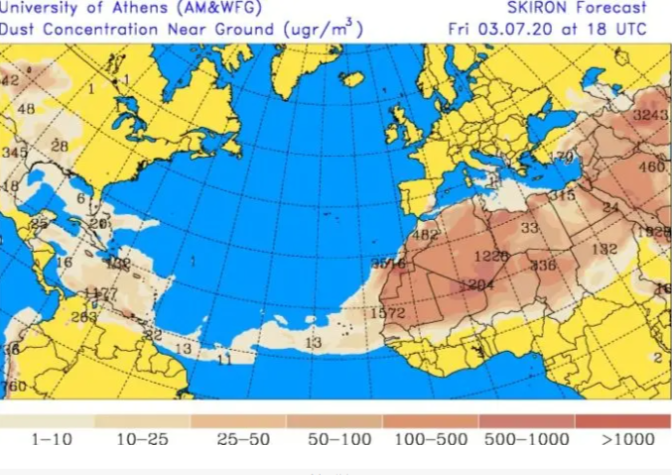 Today, especially in the afternoon hours and according to the models of aerosols and dry particulates, a slight and gradual increase in Saharan dust particles is forecast, but not as significant as the incursions that were occurring a few weeks ago.

This was reported by the National Meteorological Office, at the time it said that due to the hot environment, it recommends drinking adequate liquids, wearing light clothes, preferably in light colors, and not exposing yourself to solar radiation for prolonged periods between 11:00 am and 4:00 pm.

Onamet explained that the conditions of the weather dominate the presence of a high-pressure system that will be generating more stable conditions on our territory.

However, due to the passage of a new tropical wave and the effects of daytime and orographic warming, cloudy increases will occur in the afternoon hours accompanied by scattered downpours, thunderstorms and occasional gusts of wind over some localities of the Caribbean coastal coast, the Central Cordillera and the northwest region of the country.

This coming Saturday, an environment of low humidity and with the presence of Saharan dust particles, will be limiting cloudy developments and the occurrence of significant rains over our country.

However, a trough located at various levels of the troposphere and the effects of the dragging of cloudy fields caused by the wind will promote scattered showers and isolated thunderstorms towards some localities in the regions: southeast, southwest and the Central Cordillera.