Abinader’s first day as President-elect of the Dominican Republic 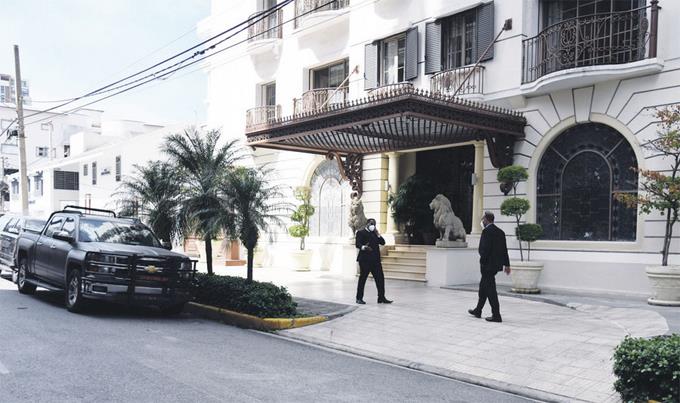 This is the building where the president-elect, Luis Abinander resides; security was discreet. There were few vehicles, all parked in the front. JOSÉ ALBERTO MALDONADO / LISTÍN DIARIO

On his first day as the newly elected head of state, Abinader chose to enjoy a moment of tranquility, calm, serenity, together with his family and some members of his team, with whom he dispatched matters of interest.

After six years of aspirations in his new party, the Modern Revolutionary, Luis Abinader, who had the gift of persistence, always prompting his thumb to show the way up, towards power, reached his goal.

It was an intense and tiring day, loaded with infinite responsibilities, an accumulation of things told from before and after all the impetuous electoral moment.

When Abinader had his dream day, the day of electoral victory on Sunday, July 5, only he knows of his gasps. So, for sure, yesterday spent a whole day away from the raucous noise of the speakers, from long trips, endless meetings, and elusive scampering among crowds and their unique hubbub.

On his first day as president-elect, Luis Abinader chose to enjoy a moment of tranquility, calm, serenity. I am not engaged in public activities. He took refuge in his residence in the capital, along with his family. Only, even in the stillness, he needed after so much proselytizing bustle, he dispatched his team through the Zoom platform and other social networks.

Little security
At home, security was discreet. There were few vehicles, all parked in the front.

Only tenants were seen entering and leaving the building. When a citizen reaches the presidency of the Republic, it is normal for the entire habitat of his residence to change radically due to the high number of security personnel inside and around the building. The leaders are usually jealous of their family residences and only allow intimacy to those close to them and their closest circle.

Political or government meetings are held in the presidential house and in previously chosen places for such activities.

In the case of Luis Abinader, he owns a large premises that function as a Campaign Command, located in the El Vergel sector, on 27 de Febrero Avenue, in the capital.

His speech
The presidential candidate of the Modern Revolutionary Party (PRM), Luis Abinader, declared in a speech in the campaign command of that organization before thousands of followers: “We won, today we win.” He added that Dominicans have given a beautiful demonstration of civility.

“We overcame fear with hope and doubt with determination; tonight we save the future because we hold the most important office in a democracy, the office of going to vote,” said Abinader, recognizing the behavior shown by the population when going to the polls. At the time that Abinader was heading to the country, he had obtained 53.09% of the 17.57 percent of the votes cast in the country.

Preliminary results place the candidate of the Dominican Liberation Party (PLD), Gonzalo Castillo, with 37.24% of the votes. The third-place would correspond to former President Leonel Fernández, candidate of Fuerza del Pueblo, with an 8.65 percent.

His rivals Castillo, Fernández and Guillermo Moreno, congratulated Abinader on his triumph in the elections, which extended to the entire PRM militancy, and wished him many successes in his administration. It was a demonstration of political maturity that had not been seen in the last electoral processes.

TRADE
What PLD said after its defeat
Temo speaks

In a statement, the PLD says that it “is proud to be revalidating, once again, the principle inherited from its founder, Professor Juan Bosch, that in its hand’s democracy never would perish; and he congratulates himself that, as never before, the democratic system has come out so exalted, so consolidated and so strengthened.”