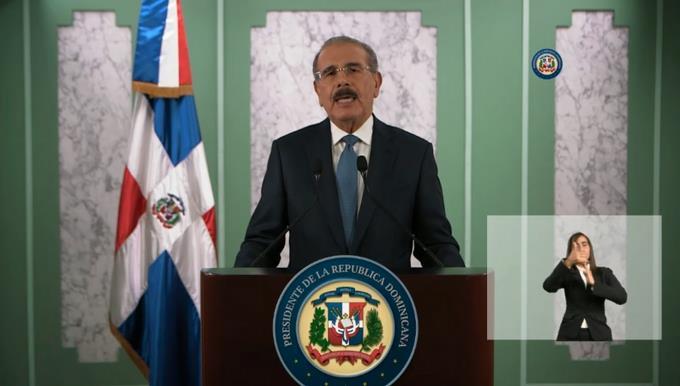 The President of the Republic, Danilo Medina

The letter from the Executive Branch addressed to the president of the Chamber of Deputies explains the reasons for the suitability of approving a new state of emergency, this time for 45 days, to contain the expansion of the coronavirus in the Dominican Republic.

President Danilo Medina explains that the revival of economic activities and the conduct of the electoral campaign have produced a considerable rebound in the number of infections, which represents a serious threat “to the ability of the hospital system, public and private, to give responses to the demand for medical care for people affected by Covid-19.”

“This reality and the trend observed in the number of infections registered every day raise the need to re-establish restrictive measures to prevent the response capacity of the hospital system from overflowing, which would have a serious negative impact on health and the life of Dominicans,” says the letter addressed to the president of the Chamber of Deputies, Radhamés Camacho Cuevas.

The communication by President Danilo Medina says that the Dominican Government is making great efforts to increase the number of hospital beds and intensive care units to care for Covid-19 patients.

“Along with the implementation of a series of measures to strengthen the response capacity of the health system to the challenges of this pandemic, but these have not been sufficient to stop the increase in the levels of contagion that have occurred as a consequence of the economic opening, the electoral campaign and the lifting of the state of emergency,” he points out.

Currently confirmed cases of coronavirus exceed 47,000 and deaths more than 900.

“After consulting the elected authorities, President Danilo Medina requests authorization from the National Congress to declare the national territory in a state of emergency again for 45 days due to the recent epidemiological evolution of COVID-19,” presidential spokesman Roberto tweeted. Rodríguez Marchena.

This would be the longest state of emergency that the country would have to face the current coronavirus pandemic. The first request made by Danilo Medina occurred for a maximum period of 25 days. This new one practically doubles it.

It is the first time that the national emergency has been delivered to the Chamber of Deputies since President Medina normally requested it from the Senate of the Republic, where it was easily approved.

Danilo Medina’s requests began to confront problems in the Chamber of Deputies, where his political organization does not have an absolute majority to obtain his approval. The opponents, led by the Modern Revolutionary, now elected authorities, refused to continue approving extensions, alleging that it was being used to campaign for Gonzalo Castillo and the PLD.

Now, with the approval of the elected authorities, it is a fact that the state of emergency is easily approved in both legislative chambers.