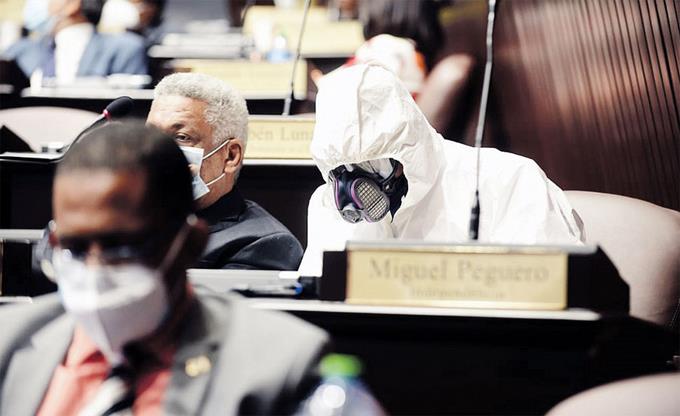 Approval of a request for a 45-day extension of the national emergency yesterday in the Chamber of Deputies, the legislators use masks to avoid contagion from Covid, but none to such a degree as Miguel Peguero Méndez (right), of the Popular Christian Party (PPC ) for Independencia province. /P.2 / VÍCTOR RAMÍREZ

The request for a 45-day extension to the national state of emergency has not only become the most extensive requested by President Danilo Medina in the face of the increasingly deadly advance of Covid-19, which has already claimed 942 lives, rather, but it also becomes a litmus test for the State in the face of the registered acts of disobedience to the measures.

Now, the authorities will have to decide whether to impose the force of the law to protect the health of the population or yield to the challenge and contempt that many citizens have incurred.

This is the seventh emergency request and could start next Monday, after its approval.

Tomorrow, Sunday, it will be known by the Senate, where the conditions are in place to be approved without opposition.

A notable detail this time is that, contrary to the decision to close the maritime, land and air borders announced on May 17 by President Medina, when deciding the step of de-escalation to reactivate the economic one, they will now remain open.

The extension of the emergency, for 45 days, was approved by the 128 deputies of the different benches present. President Medina made the decision after having discussed it with the new authorities that will take over from August 16.

This measure occurs in the midst of the transfer of government.

The state of emergency grants special and temporary powers to the President of the Republic to handle an immediate threat to the country and demands an immediate response.

With the declaration of emergency, restrictions could be applied, for as long as necessary, to the freedoms of transit, association, and assembly of people.

President Medina explains in his communication sent to the president of the Chamber of Deputies that “two simultaneous factors – on the one hand, the revival of economic activities and, on the other, the conduct of the electoral campaign – have produced a considerable outbreak in the number of infections, which represents a serious threat to the ability of the hospital system, public and private, to respond to the demand for medical care for people affected by Covid-19.