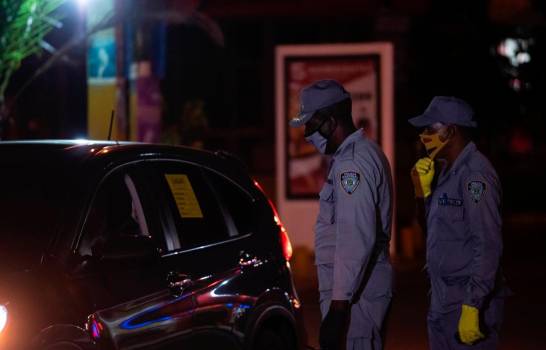 The Minister of the Presidency, Gustavo Montalvo, explained the measures contemplated by the current state of emergency that came into effect Monday, and whose curfew began yesterday from 7:00 at night in the National District, Santo Domingo and 14 other provinces, while in the other jurisdictions it starts at 8:00 pm to 05:00 am.

For the traffic restrictions, he informed that the recently issued safe-conduct permits are still valid and that they must be physically carried and be shown in original, together with a personal identity document, to the authorities that request it.

“They are only valid in transit to work (…) permits are for the transit of health personnel or people with health problems, basic services, press and for employees of economic activities with multiple shifts or with continuous work of 24 hours, such as industries, free zones, mining, pharmacies, hospital construction, among others,” said the Minister of the Presidency.

He reiterated that the transport of goods and fuel have free transit, without the need to carry safe-conducts.

Restaurants and grocery stores may operate, but …

According to Montalvo, “restaurants can continue to operate in-home delivery and pick-up mode and also provide service in open spaces such as terraces. And in the interior areas operate with the doors and windows open, always keeping two meters of distance between each table.”

Grocery stores and places to sell alcoholic beverages will not be able to open tables for the public, for which reason all sales should only be to take away.

“All commercial activities continue the differentiated schedules established above, at 7, 8, and 9 am. And remember that businesses that can work by appointment, such as beauty salons, doctor’s offices, must remain in this modality.”

Gyms that were recently authorized to open “must close again,” Montalvo reported.

The official affirmed that the decision to keep these spaces closed is “because the use of masks is not recommended while exercising.”

Until further notice, public spas and swimming pools are closed. The beaches will remain open to the public, respecting the distance measures.

The galleras continue to be prohibited in the current state of emergency.

Public parks will be open

Public parks will remain open so that the population can exercise outdoors and with natural ventilation, although always keeping due distance with others.

The religious services will continue to be authorized as before, maintaining the rules of hygiene and social distancing.

The use of public and private passenger transport will continue to be limited to 60% of its capacity for minibusses and buses, both urban and interurban, trains, and the cable car.

“We also insist on the obligation to wear a mask on the streets, in public places and in the workplace, as well as the need to continue to exercise extreme caution with hand washing and surface sanitization,” said Gustavo Montalvo.

All public sector services will operate

The public sector will continue operating all its services and during regular service hours, but “with the necessary personnel. The rest of the staff will work under the modality of teleworking,” explained the official.

Trade at the border, allowed

The Minister of the Presidency said that “the land borders of the country will continue to be closed, except for the transport of goods.”

The curfew will take effect from today July 21 of the current year for a period of twenty days, at the end of which the measure will be reviewed based on epidemiological developments in the country.