Only 16% of the DR does not have access to a healthy diet, but COVID-19 could change that 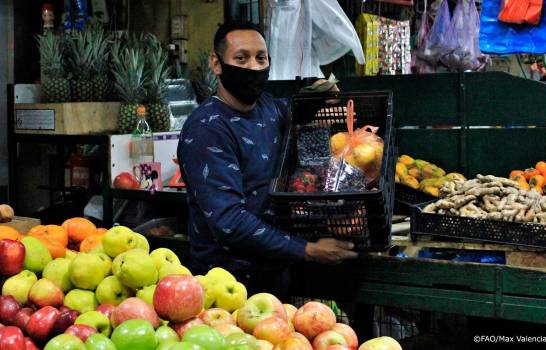 According to a study presented by the UN, in the Dominican Republic, 16.0% of the population cannot afford access to a healthy diet with the income they receive. (EXTERNAL SOURCE )

The United Nations System in the Dominican Republic warned about the need to incorporate policies that increase the population’s access to healthier diets, which can be up to five times more expensive than those that only meet energy needs.

The cost of nutritious food must be reduced to increase the accessibility of healthy diets according to the report The State of Food Security and Nutrition in the World 2020, jointly prepared by six United Nations agencies: FAO, IFAD, PAHO / WHO, WFP, and UNICEF.

According to a press release, the annual report indicates that the factors that determine the cost of healthy diets are observed throughout the entire food supply chain, production, distribution, and the policies that are implemented from public and investment spending.

The note indicates that this year, the report has a particular focus on transforming food systems to achieve healthy and affordable diets and analyzes the cost and affordability of these diets around the world.

It also provides a new analysis of the “hidden” costs for health and climate change associated with our current dietary consumption patterns and the savings that would result from changing to healthy diets that include sustainability considerations.

The study ensures that healthy diets are unaffordable for many people, especially the impoverished population, in all regions.

In the Dominican Republic, 16.0% of the population cannot afford access to a healthy diet with the income they receive, due to its cost of around $ 4.06 per person.

The report also offers policy recommendations for transforming current food systems towards models that contribute to healthy and affordable diets for the entire population. This is crucial in efforts to achieve the Zero Hunger Sustainable Development Goal (SDG-2).

The UN believes that addressing these factors will require significant transformations in food systems. These include rebalancing agricultural policies and incentives throughout the food supply chain and social protection policies for countries to increase the purchasing power of the most vulnerable populations and access healthier diets.

“Through this study, we are offering an analysis that contributes to defining actions and comprehensive public policies that allow accelerating the fulfillment of the 2030 Agenda. At the same time, we are moving towards an inclusive, resilient, and sustainable socio-economic recovery in the face of COVID19,” said the representative of the UN in the country, Mauricio Ramírez Villegas.

This goes hand in hand with employment generation policies, especially for youth and rural women. In this sense, incorporating innovations and new digital technologies to increase production and market access for farmers is essential.

“Thousands of family farmers will be strongly affected their income strategies and their livelihoods and production, for which we must work for a speedy economic recovery from the effects of COVID19 on food security and nutrition,” said the representative of the FAO in the country, Rodrigo Castañeda.

Castañeda pointed out that the new agriculture agenda should promote public-private alliances that allow increasing the participation of family farming in those areas and products in which they can have comparative advantages, such as bananas, vegetables, dairy products, fruits, bananas, rice, etc. among others.

The agency’s representative appreciated the contribution of the school feeding programs to the food security of the school population that is developed in the country with technical assistance from FAO and WFP. And he hopes the new authorities will continue this.

Similarly, the representative of the World Food Program in the country, Romain Sirois, that “the study also warns about the increase in one of the components of malnutrition, obesity, which constitutes a severe health problem, since it increases the risk of non-communicable diseases, both in children and adults. “

There is a decrease in DR

The report highlighted that about 690 million people suffer from hunger, that is, 8.9% of the world’s population (an increase of about 10 million people in one year and about 60 million in five years). To this figure should be added between 82 and 132 million people who could fall into undernourishment by the end of 2020 due to the effects of the COVID19 pandemic.

If recent trends continue, the number of people affected by hunger will exceed 840 million in the world by 2030, which casts doubt on reaching Zero Hunger by that date.

In the Dominican Republic, the indicator of undernourishment has registered a decrease, falling from 19.3% of the population in 2004 to 5.5% in 2019. These numbers translate to 600 thousand undernourished Dominicans. However, the effects of the current pandemic will harm these figures, increasing levels of food insecurity.

Other forms of malnutrition in the DR

The UN report reveals that negative indicators regarding child nutrition persist in the country, since the percentage of children under five years of age with acute malnutrition stands at 2.3% for 2019, while the prevalence in retardation growth registers 10.1%.

Likewise, the percentage of children with low birth weight presents 11.3% in 2019, which constitutes a slight decrease compared to 2012, which registered 11.4%.

The figures for exclusive breastfeeding in children from 0 to 5 years old continue to be alarming, since from 8.0% that the country registered in 2012, the numbers dropped to 4.6% for the year 2019.