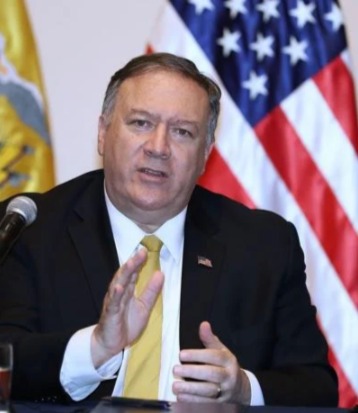 Mike Pompeo will arrive in the country early in the morning to attend the inauguration.

The president of the United States, Donald Trump, announced that the delegation of that nation that will participate in the presidential inauguration of Luis Abinader next Sunday would be headed by the Secretary of State, Mike Pompeo, who will meet with the President.

The announcement published on the White House page establishes that, in addition to Pompeo, the ambassador to the Dominican Republic, Robin S. Bernstein, and the acting undersecretary of the State Department’s Office of Western Hemisphere affairs, Michael G Kozak.

A note from the State Department explains that “during his visit to Santo Domingo, the Secretary will meet with President Abinader to discuss opportunities to strengthen our alliance and focus on promoting transparency, democracy, and security in the region.”

He adds that “together we will overcome the challenges of the pandemic and reactivate our economies.”

At the swearing-in of Abinader, there will also be a delegation from Spain chaired by the Minister of Foreign Affairs, María Aranzazu González.

Then Medina will leave and will not be present at Abinader’s swearing-in ceremony, due to Covid-19.

This is one of the many measures that will be taken for reasons of space and to keep the prevention protocol imposed by the coronavirus pandemic, which has forced the protocol ceremony to undergo significant variations.

The assembly hall has capacity for 570 people. Still, due to the Covid crisis, it has been reduced to about 300 guests, of which 222 are members of the assembly, that is, deputies and senators that make up the legislative body.

No outgoing or incoming officials will attend Abinader’s inauguration, and at the end of the day, there will be no military parade, as has been the tradition.

According to the next Minister of Foreign Affairs, Roberto Álvarez, the president-elect’s swearing-in act will be limited to taking office with fewer people than is customary. Abinader, together with the vice president, Raquel Peña, will go for the first time as president and vice president to the National Palace, where some decrees will be issued, and new officials will be sworn in.

From there, the president will go to Tedeum in the Cathedral, and then to the Altar of the Fatherland for a floral offering, and returns to the government house for lunch with special guests.

They prepare the Salón Congreso

The hall of the National Assembly has already been conditioned to keeping the social distancing, where space is maintained between each chair.

Before the legislative chambers’ joint session, the executive bureaus of the deputies and senators will be chosen, and the corresponding legislature will begin.

The deputies and senators will attend for the first time after being elected in the elections held on July 5.