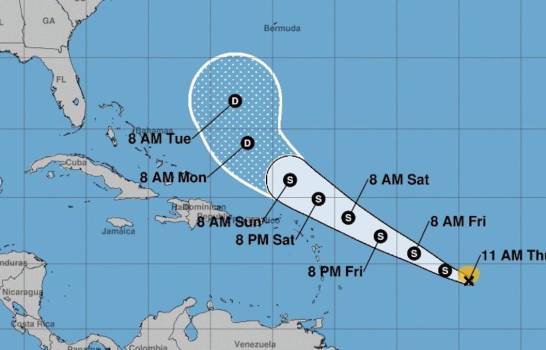 Tropical Storm Josephine, which is raging above the waters of the tropical Atlantic Ocean, has reduced the force of its winds. However, it could leave rain on its way to the northwest in the Windward Islands, the US Virgin Islands, and Puerto Rico.

At this same time yesterday, the maximum winds of Josephine were near 75 km/h, with stronger gusts.

According to the US National Hurricane Center (NHC), some additional strengthening is possible during the next 24 hours. After that time, Josephine is expected to encounter “upper-level winds that will not be conducive to her strengthening.”

Although there are no coastal watches or warnings in effect, the NHC announced that a hurricane chaser “has been scheduled” to investigate Josephine this afternoon.

The storm moves west-northwest with a translation speed of about 26 km/h, and this general motion is expected to continue for the next two days.

A turn to the northwest is forecast at the end of this weekend or beginning next week.

On the forecast track, Josephine is expected to pass northeast of the Leeward Islands this weekend.

Tropical-storm-force winds extend out of the system up to 130 km, mostly north of the center, the NHC says.

Among the hazards that may affect some secure areas, the observatory indicates that Josephine could produce total rainfall accumulations of 2.54 to 7.62 centimeters over parts of the northern Windward Islands, the US Virgin Islands, and Puerto Rico.

Regarding the surveillance and warnings, the agency marked “interests” in the Windward Islands, which should monitor this system’s progress.

Tropical storms Arthur and Bertha have already formed this year, both before the cyclonic season’s official start, which begins on June 1 and ends on November 30.

Then Cristóbal, Dolly, Edouard, Fay, Gonzalo, and Hanna followed, the latter the first hurricane this year in the Atlantic, which made landfall in Texas on July 25.

Last week Isaías made landfall as a hurricane in the Bahamas and then skirted and stormed the east coast of the United States, causing at least five deaths and economic damage.

The US National Oceans and Atmosphere Administration (NOAA) indicated that the 2020 Atlantic hurricane season can make history with 25 named storms.