UPDATE: What is the jellyfish that stung divers in La Caleta like and how dangerous can they be? 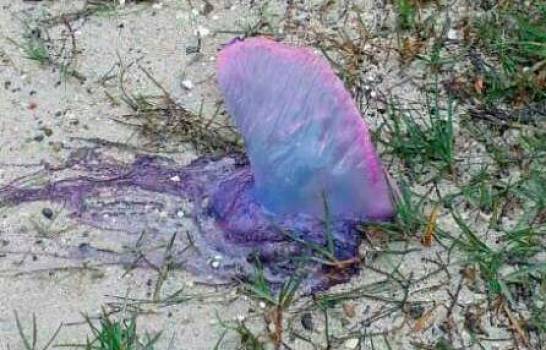 Several divers and surfers on the beach of La Caleta, in Boca Chica, were stung by jellyfish that caused injuries to different parts of the body, for which they had to be rushed to a health center, some of them unconscious.

From Diario Libre came an image of the sea animal identified as involved in the injury of people, if true, is a Portuguese man-of-war  (Physalia physalis).

Although many define it as a jellyfish, the Portuguese man-of-war is only jellyfish-like in appearance. It is not a single animal. In reality, it is a colony of organisms that, in perfect symbiosis, divide the work to float, detect and capture prey and to digest. The Man o’ War is a siphonophore species, a group of animals that are closely related to jellyfish.

The name of man-of-war refers to the way they move in the ocean. They have a kind of gelatinous sail up to 30 centimeters full of gas pushed by the wind and currents.

Under this species, the gas bladder sail body has several strand-like tentacles that can reach up to 20 meters in length. The strands contain small capsules with poison (nematocysts) and use them to capture their prey, paralyzing them with a potent protein toxin.

The stinging cells are the form of needles called nematocysts. These needles can penetrate humans’ skin and burst inside. The stings cause great pain with neurotoxic, cytotoxic, and cardiotoxic consequences, producing very intense pain and, in some documented cases, death.

These marine animals inhabit tropical waters around the world and do not move in groups.

In the case of seeing a Portuguese man-of-war, it is best to quickly move away from observing where the tentacles are and avoid having contact with them. The first thing to be applied is ammonia or alcohol on the affected skin, seek medical attention to avoid complications. Even in dry areas, the tentacles are capable of injecting the toxin.