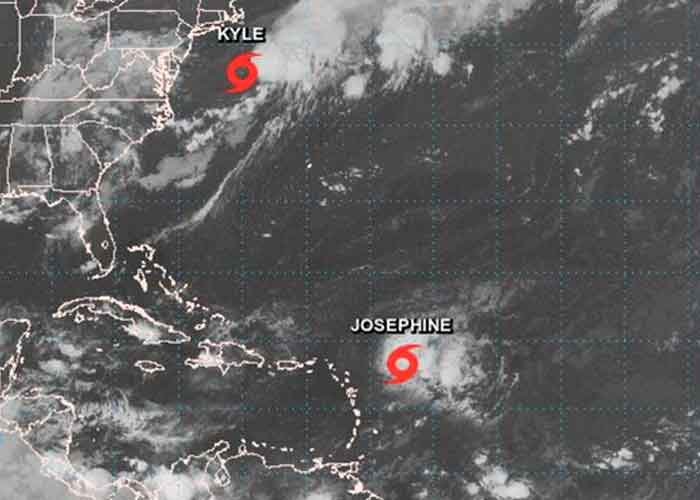 SANTO DOMINGO ESTE, RD.-The National Meteorology Office -ONAMET- reported this Saturday night that it is monitoring the trajectory and evolution of Tropical Storm Josephine, located about 255 km northeast of the Leeward Islands, with maximum sustained winds 75 km/h and higher gusts.

The phenomenon is moving towards the west/northwest at about 28 km/h.

Due to its current displacement, the storm does not represent a danger for the Dominican Republic.

ONAMET also reported that Tropical Storm Kyle, which was located about 1,150 km southeast of CAPE RACE NEWFOUNDLAND, moving east/northeast at about 35 km/h with maximum sustained winds of 85 km/h; Due to its position and displacement, it does not represent a danger to the Dominican territory.

Meteorology adds that for this Sunday there will be a mixture of clouds and sun in the morning, and afternoon a trough will continue to affect the country, giving rise to the occurrence of cloudy with local showers, thunderstorms and occasional gusts of wind towards the northeast regions, southwest, southeast, Cordillera Central and along the border zone.

By the start of the workweek, the trough will continue to cause cloudy with scattered showers and occasional thunderstorms, especially in the afternoon hours in the regions mentioned above.