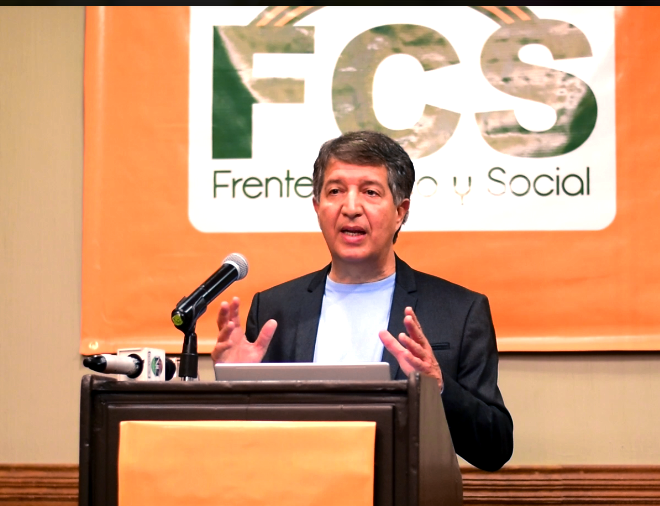 Isaías Ramos reminded the president that there are sectors such as agriculture that, for decades, have been forgotten with which he should be more generous to ensure higher productivity and competitiveness in international markets.

SANTO DOMINGO, Dominican Republic.- Isaías Ramos, president of the Civic and Social Front, considered that amid the circumstances that we find ourselves, the president’s speech was a balm and a hopeful breath for a people that have been killed by looting, oppression, and violation of their rights.

Ramos expressed that the mere fact of guaranteeing quality health and education as absolute rights and judicial independence is a beginning towards a restorative transition of citizen rights. They are like a glass of fresh water in the middle of the desert.

On the other hand, Ramos considered that some issues of high relevance for the nation’s development, such as the energy sector—which lacks efficiency, competitiveness, and infrastructure—were relegated to the background. While industries that are currently experiencing a period of uncertainty, such as the tourism sector, are being pushed to expand. In reality, we must focus on the sustainability of the infrastructures presently existing.

Ramos said that he does not doubt the good intentions of the current president but that he could misdirect his efforts to sectors that are currently experiencing uncertain times.

Ramos reminded the president that there are sectors such as agriculture that have been forgotten for decades, with which he should be more generous to ensure higher productivity and competitiveness in international markets and have the food security of the Dominican people covered and at the same time promote a return to the field of thousands of peasants who abandoned their farms in search of a better future and today have been stranded living in ghettos without work, without opportunities and in dens of perversion while the fields are occupied by foreigners who little by little are displacing the creole undermining the sovereignty and our culture.

He also suggested supporting the fledgling eco-tourism industry and agrotourism to help the peasant live a more dignified life.

Finally, Isaías Ramos reminded the president that the last three presidents who preceded him also promised the people at the time of assuming the government judicial independence, attacking corruption, ending impunity, facing poverty, seeking unity and returning power to the people: issues that still remain unsolved today, so we have faith that his words will not remain in a vacuum because the desire of every good Dominican is that the discursive words with which he captivated the majority of the people do not remain in simple promises but rather they take shape in actions for the welfare of an entire people.