Dominican Republic under red, yellow and green alerts for 22 provinces by Laura 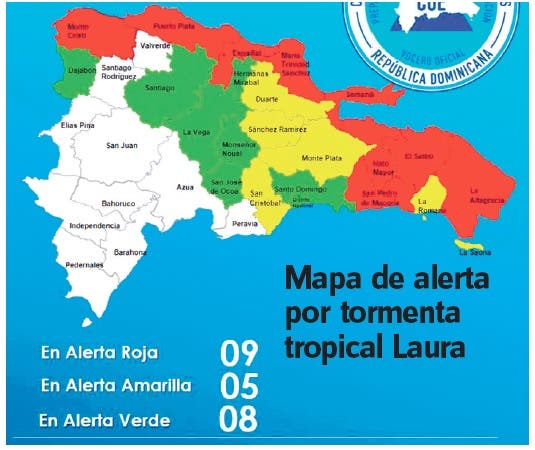 Organizations’ guidelines and orientations Emergency Operations Center (COE) raised the alert for 22 provinces last night, of which nine are in red, five in yellow, and eight in green due to the proximity of Storm Laura. While the National Meteorological Office (ONAMET) foresees that today there will be heavy downpours, thunder, and gusts of wind in part of the country.

The National Meteorological Office maintains the warning of tropical storm conditions from Cape Engaño to Manzanillo Bay, due to strong winds, abnormal tides, high waves and heavy to intense rains.

For today, ONAMET foresees moderate to heavy rains with thunderstorms and gusts of wind over much of the territory, more intense in the Northwest, North, Northeast, Southeast, Southwest, Central mountain range, and the border area, where flash floods and landslides could occur. Additional dangers are overflowing of rivers, streams, and ravines.

For tomorrow, it forecasts the occurrence of moderate to torrential downpours, electrical storms, and frequent gusts of wind, and there could be flash floods, landslides, overflowing rivers, streams, and gullies over some areas of the country.

Given the occurrence of downpours, the COE urges people who live in vulnerable areas where landslides, floods due to overflowing rivers, streams, or ravines may occur to adopt the provisions to avoid loss of life or damage to property.

Also, follow the guidelines and orientations of the civil protection organizations and keep in contact with the Civil Defense, the Armed Forces, the Red Cross, the National Police, and the Fire Brigades.

The storm Laura. Last night the center of Tropical Storm Laura was at latitude 17.1 north and longitude 61.7 West, in the eastern vicinity of Antigua, in the Leeward Islands, Lesser Antilles, about 730 kilometers east/southeast of Cape Engaño and 845 km. southeast of Cabo Cabrón, moving west at 28 km/h (18 mph), with maximum sustained winds of 75 km/h (47 mph), with a minimum central pressure of 1007 millibars.

Onamet forecasts indicate that tropical depression number 14 of the current cyclonic season was last night 415 km southeast of Cozumel, Mexico, with maximum winds of 55 km/h and moving west at 20 km/h still it does not represent a danger for the Dominican Republic.

It also monitors the evolution of a tropical wave between the west coast of Africa and the Cape Verde Islands that affects disorganized downpours and thunderstorms and is expected to move over the distant tropical Atlantic. It has a 20% chance of becoming a cyclone in the next five days.

Civil defense. The Civil Defense activated its contingency plan yesterday, in coordination with the governors and mayors, and has identified the more than two thousand shelters and the most vulnerable points throughout the national territory.

The director and president of the National Emergency Commission (CNE), General Rafael Antonio Carrasco Paulino, reported that President Luis Abinader instructed the 32 governors to activate the Prevention, Mitigation, and Response Committees in their respective locations.

The capital’s Mayor’s Office would also make provisions for residents in vulnerable areas. Also, tree pruning, scupper cleaning and suctioning, waste collection, and notification to constructions to secure the domain and collect debris.

The shelters. The director of the DC reported that they have 2,396 accommodations, with capacity for 577 thousand 193 people. Due to the covid-19 pandemic, there are 146 extra shelters to house 294 thousand 409 people a physical distance.

He explained that the 14,132 volunteers available to the entity began prevention work in the places of greatest vulnerability, and mayors were instructed to activate their municipal emergency committees to adopt measures.

Occupation of a school building under construction