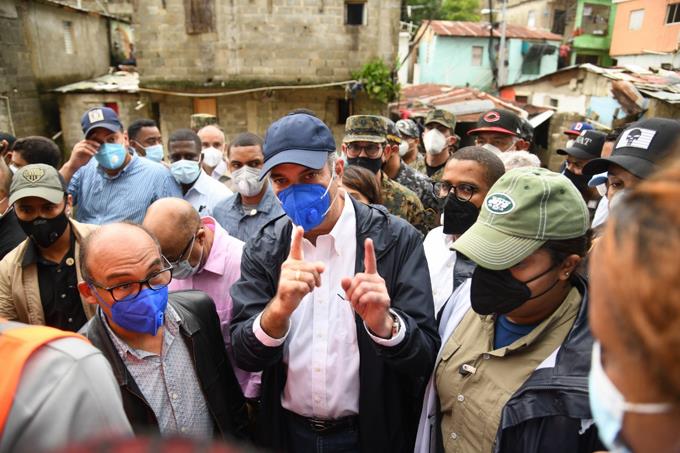 Different members of the Dominican government, led by President Luis Abinader, visited yesterday the areas most affected in greater Santo Domingo by the passage of Laura’s tropical storm.

The President of the Republic visited the La Yuca de Los Ríos sector in the afternoon, one of the communities most affected by the passage of the tropical storm in Greater Santo Domingo, where he promised to find a comprehensive way out to remove people from vulnerable areas.

He said that the intention is to remove all people from the banks of rivers and ravines, so they always live in a situation of high vulnerability to the passage of storms and hurricanes, as is the case that the country is experiencing now.

He also added that the plan to be developed would take several years. Still, people from the riverbanks and ravines will move from their homes, thereby reducing vulnerability factors to zero.

“The plan we have is comprehensive. It will take us several years to solve the issue of the great ravines,” explained Abinader.

The president also asked people who currently reside in vulnerable areas to be vigilant, especially those who live in lower Yuna, and near the Monte Grande dam, which is under construction.

The president also took the opportunity to express his condolences to the families of the four people who died during the storm’s passage and assured that he instructed the Government institutions to take care of those families, providing them with all the help they need.

He said that the State is working and that citizens could have confidence that all institutions were focused on mitigating the damage of tropical storm Laura.

The mayor of the National District, Carolina Mejía; the administrative minister of the Presidency, José Ignacio Paliza, director of the government’s social policies, Tony Peña Guaba, and the general director of the Emergency Operations Committee (COE), Juan Manuel Méndez, accompanied Abinader on her visit to La Yuca.

Similarly, President Luis Abinader met this Sunday night with the National Emergency Committee at the National Palace. He received reports of the damage left by storm Laura as it passed through the country.

Milagros Germán, the spokeswoman for the presidency, said that the meeting held a survey of the damage as she passed through the country and the aid that the Government has given and will give.

He indicated that starting at 8:00 in the morning on Monday, President Abinader will fly over Laura’s national territory to assess the dams’ situation and the most vulnerable areas.

“Luis Abinader will fly over the national territory tomorrow to see with his own eyes the situation of the dams and the most vulnerable territories,” said Germán.

He assured that this Monday aid would also continue to reach all the people who have been victims of the floods.

Raquel Arbaje, the first lady of the Republic, attended the wake of a woman and her youngest son who lost their lives early Sunday morning after a wall collapsed due to the rains from tropical storm Laura, in Los Alcarrizos.

“You are not alone. We do not do this out of politics, we do it out of humanity, ”Arbaje exclaimed while holding the hands of the relatives of the fatalities.

Arbaje was accompanied by Gloria Reyes, who is the current director of the Progresando con Solidaridad program.

Likewise, the First Lady assured that together with the Minister of Public Works, Deligne Ascencion Burgos, they would prevent the loss of lives due to overflowing gullies.”