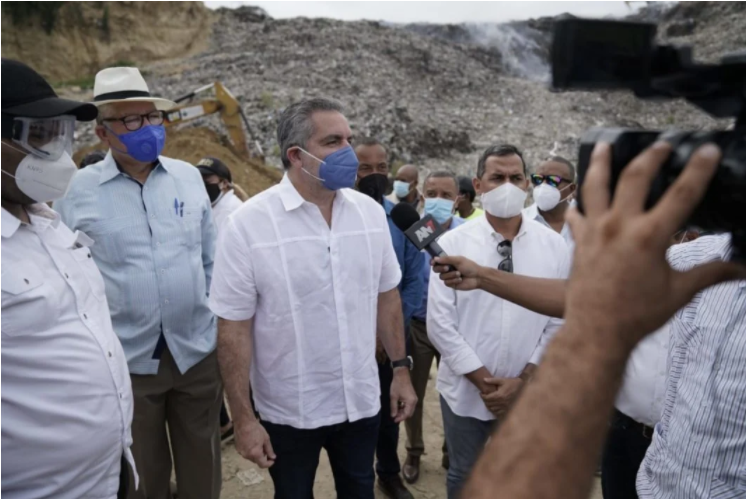 San Cristobal. -–President Luis Abinader ordered this Monday, through the Directorate of Strategic and Special Programs of the Presidency, the intervention of the Haina landfill, in San Cristóbal, to improve the precarious situation with which that landfill currently operates.

With that objective, Minister José Leonel (Neney) Cabrera visited the landfill, where at least three fires have been registered since last year, this weekend caught fire again, which affects the health of the municipalities.

“President Luis Abinader called us yesterday and instructed us so that the intervention is permanent until this landfill’s problem is resolved,” said Cabrera.

Neney Cabrera pointed out that the intervention will be inter-institutional and also includes the Ministries of Public Works and Defense, to provide the landfill with greater security and prevent unscrupulous hands from continuing to set the dump on fire and causing the damage it generates.

The official said that the government of President Luis Abinader has a different approach to solid waste management and to solve the problem, not only of the Haina landfill but also that of the 356 that exist throughout the country.

Cabrera explained that the intervention would allow the Haina landfill to receive solid waste, not only from the principal municipality but also from the nearby municipal districts and other surrounding areas.

He expressed that they will establish a transfer station with sufficient capacity to receive all the waste produced by the area.

“The intervention will be comprehensive. It will not only be to put out the fire but also to make a perimeter fence. We are going to put out the fire and provide the place with enough lighting so that waste can also be dumped at night,” emphasized Neney, who was accompanied by operational technicians, landfill specialists.

Also along were the municipal director of Quita Sueño, Antonio Brito, and the inspector general of the city council, Wilson Uceta.