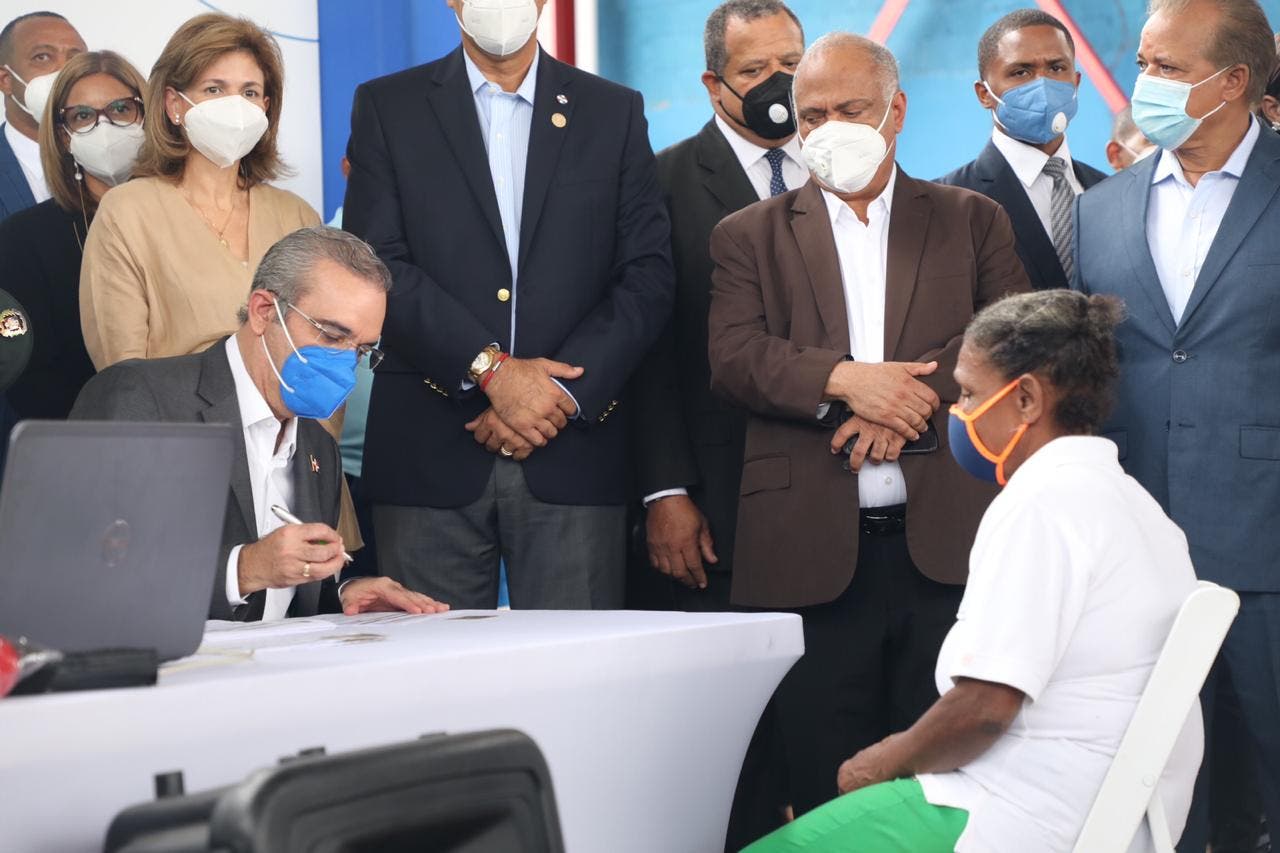 The President of the Republic gives Estebanía Soto, 65, his medical card.

SANTO DOMINGO.-President Luis Abinader asked all Dominicans who do not have SENASA medical insurance to please go to an office of this insurance, “so that they can join, and we can meet the goal of two million new members to December.”

The president made the call at the beginning of the Day of massive affiliation of two million Dominicans to the Subsidized Regime of the National Health Insurance (SENASA), in the Club Los Pioneros Villas Agrícolas sector, of the National District.

Abinader was accompanied by the vice president Raquel Peña, coordinator of the Health Cabinet, and the members, Plutarco Arias, Minister of Public Health, and Santiago Hazim, executive director SENASA. The president said that he trusts that this insurance administration, between now and December, will achieve this objective, which will bring peace of mind to homes since health will be guaranteed.

From the hands of the President of the Republic, Estebanía Soto, 65, received his card, expressing great joy at his tranquility and the Governor’s initiative.

As part of the Membership Day, dozens of people arrived very early. Keeping their physical distance, they were at the Pioneros Club, making new registrations and removing previously requested cards.

Health is not a privilege

Meanwhile, Dr. Santiago Hazim, executive director of SENASA, affirmed that health is not a privilege and that every citizen must have health insurance covering illnesses.

In Villas Agrícolas, the services offered are affiliation, re-affiliation, and unification of the family nucleus. The process will last until tomorrow, September 2, from 9:00 a.m. to 5:00 p.m.

Euselky Benítez withdrew his card and those of his three minor daughters, for a total of four insurances that represent a lot of peace of mind in terms of health.

Likewise was the case of Danyery Carolina Martínez, an 18-year-old girl, resident in Villas Agrícolas, who withdrew her card, that of her mother and her sister.

He said that having insurance guarantees “better care when they go to health centers during the present pandemic.”

The requirements that must be met by the people who will carry out the process of affiliation, re-affiliation, or family unit unification for the Subsidized Regime are the correct use of a mask, identity card, birth or marriage certificate if it is for nucleus unification.

Currently, SENASA has 3 million 745 thousand 701 members of the Subsidized Regime, who are guaranteed timely access to health through public hospitals.