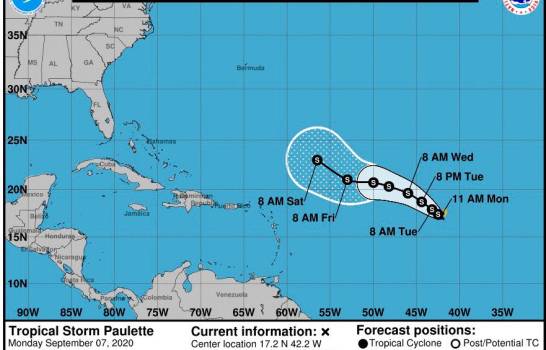 Paulette's trajectory, according to the US National Hurricane Center (NHC) (NOAA)

According to the NHC, at 11:00 local time (15:00 GMT), it was 2,215 miles from the northern part of the Leeward Islands in the Lesser Antilles and had left the African islands of Cape Verde well behind.

Paulette is moving in a west-northwest direction, and in the coming days, will turn northwest and increase speed.

Tropical storm winds extend about 70 miles (110 km) from the center of Paulette and are expected to strengthen moderately in the coming days.

For now, the NHC has not issued a notice of landfall for Paulette. This is the first named storm with the letter ‘P’ formed earlier than the end of the season (November 30) since records have been kept.

The record was held by Philippe, which formed on September 17, 2005, the year with the most active hurricane season in history, with 27 named tropical storms and one unnamed subtropical storm, a mark that will likely be surpassed in 2020.

As for Tropical Depression 18, which is about 185 miles (300 km) east of the Cape Verde Islands, the NHC predicted that it would have transformed into a tropical storm named Rene by the end of today.

In the track forecast, the tropical cyclone center is forecast to pass near or over the Cape Verde Islands later and produce rain, wind, and surf around it.

The 2020 hurricane season in the Atlantic basin, which officially began on June 1 and will end on November 30, is being as active as forecasters predicted.

If eighteen turns out to be Rene as the forecasts indicate, only four of the 21 names on the 2020 list will remain: Sally, Teddy, Vicky, and Wilfred.

If the hurricanes of a season exceed 21, the number 22 and those that follow become named after the Greek alphabet letters.

The last time this happened was in 2005.

Of the storms formed this year in the Atlantic basin, four have become hurricanes (Hanna, Isaías, Marco, and Laura), and only one of them, Laura, has been greater than Category 1.

In addition to Paulette and Eighteen, the NHC watches over an area of ​​low pressure in southwestern Bermuda, producing disorganized showers and thunderstorms for now but may develop further as it moves west or east-northwest.

The probabilities of hurricane formation are low for 48 hours (10%) and 30% in five days.