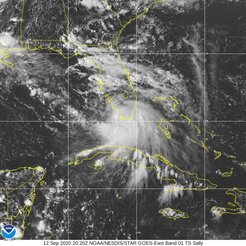 The Saturday, Sept. 12, 2020 image provided by the National Oceanic and Atmospheric Administration shows the formation of Tropical Storm Sally off the coast of South Florida. (NOAA via AP)

Tropical Storm Sally formed yesterday evening (Saturday) over southern Florida (USA) with maximum winds of 40 miles per hour (65 km/h), after crossing the peninsula towards the Gulf of Mexico with dangerous rains and storm surges, while Rene degraded in the middle of the North Atlantic.

Sally is moving west at about 7 mph (11 km/h) and has a track across the Gulf that could reach the southern states of Alabama, Mississippi, and Louisiana possibly at hurricane force.

Landfall could be as early as Monday or Tuesday of next week, according to a route chart provided by the US National Hurricane Center (NHC).

Meanwhile, it is leaving rain accumulations of up to 8 inches (20 cm) in metropolitan areas of South Florida, including the Keys, and can extend to the west coast that includes the Tampa Bay area.

Sally’s strong winds began to be felt in Miami early today, even before it escalated into a storm.

The NHC also warns of the possible presence of tornadoes, as well as life-threatening storm surges along the west-central coast of Florida and up to the Panhandle (northwest) of Florida.

At 2:00 p.m. local time (6:00 p.m. GMT), Sally’s center was 35 miles (60 km) from the coastal town of Naples, Florida. On the other hand, Rene, in the open sea and almost equidistant between the African islands of Cape Verde and those of the North Leeward, in the Lesser Antilles, degraded to a tropical depression with winds now of 35 mph (55 km/h).

Rene will continue to lose strength over the next few days according to the tour graph and without affecting any territory, something that her travel companion Paulette does not seem to accomplish.

This last system could arrive on Monday in the Bermuda Islands as a hurricane. The strength of its winds at 18.00 GMT registered 70 mph (110 km/h), said the NHC, based in Miami.

The US observatory also monitors two systems still disorganized in the eastern Atlantic but with potential for development.

It is a large area of ​​low pressure located hundreds of kilometers from the Cape Verde Islands, moving west with a high probability of becoming a cyclone in the next 48 hours.

The other is closer to Cape Verde with rains and thunderstorms, and its evolution forecast is medium, 40% in the next two days.

After Sally, only three of the 21 names on the 2020 list remain available: Teddy, Vicky, and Wilfred.

If the hurricanes of a season exceed the figure of 21, the number 22 and those that follow will be named after the letters of the Greek alphabet.

The last time this happened was in 2005.