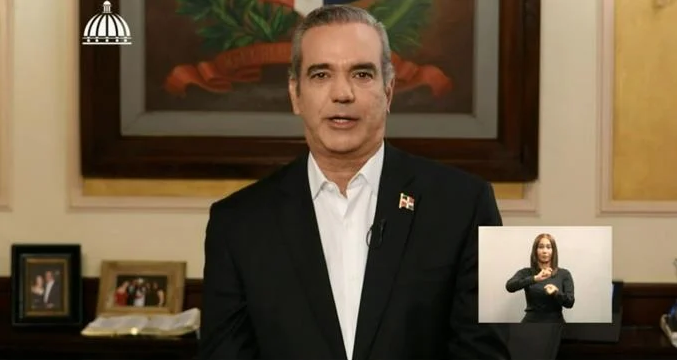 On completing the first month at the helm of the government, President Luis Abinader said last night that he works to transform the country through urgent actions against the Covid-19 coronavirus, expand health insurance coverage, and transform education and the recovery of the agriculture and tourism.

In a speech by television, radio, and digital media, the president expressed that he is fulfilling his promise to make “a transparent government that would always be accountable.”

Likewise, Abinader assured that “no one will go unpunished if they have wasted the people’s money.”

He added that for this, “we designate an independent Public Ministry whose Attorney must act with autonomy and only guided by the Constitution and the laws of the Republic. A momentous change in our history ”.

Likewise, the increase in the availability of beds and “the inclusion and participation of municipalities and social organizations in the management of this crisis.”

The head of state said that he already allocated 40,000 million pesos “so that all the young people of the Dominican Republic do not lose a single opportunity for their future.”

“We put in place plans for our public education both in material resources and in the training and capacity of teachers,” he added.

He considered that the government has “quickly adapted to the circumstances that the crisis has imposed on us because upon our arrival, there was no planned plan.”

He stressed that more than 420 million pesos are invested “so that the tourism sector recovers as the engine that is the engine of job creation and the economy of our country.”

He recalled that the Ambar highway construction from Santiago to Puerto Plata is essential, “also converting the port of Manzanillo into a great center for logistics operations and power generation to create thousands of jobs.” He pondered the project of 3,000 hotel rooms in the tourist area of ​​Pedernales, always respecting our environment.

He also recalled that to promote the field, “we placed five billion pesos in credits for producers at zero rates through the Agricultural Bank.”

Here is the full text of the speech delivered last night by President Abinader:

Today, just a month ago, I was sworn in as President of the Republic.

And today, I want to speak to you, Dominican men and women.

It is you who chose me.

It is you who voted for a change.

It is you with whom we are going to transform this country.

So I said that this would be a transparent government and that it would always be accountable.

Yesterday I presented my affidavit of assets, and this is the first time in history that it has been done straightforwardly and transparently.

We have done many things in these first thirty days in office.

We deploy an intense reform plan to make the change we promised you real.

The first thing was to undertake the urgent actions that COVID-19 forces us to do.

We decided to include two million Dominican men and women in the National Health Service. Starting this year, there will be universal and free coverage for all our compatriots.

This is the most ambitious plan that a government has ever implemented in the health sector in our country’s history.

This action plan already started to contain the spread of COVID-19 includes:

-The hiring of 1,000 unemployed doctors,

-The authorization of more public laboratories and the approval of private laboratories to carry out more tests.

-Increase in the availability of beds.

-And the inclusion and participation of municipalities and social organizations in the management of this crisis.

The pandemic does not discriminate between rich and poor.

No citizen is going to face this crisis that threatens their lives alone. We are by your side to help you.

However, we have not neglected the rest of the priorities.

We have already allocated 40,000 million pesos so that all the young people of the Dominican Republic do not lose a single opportunity for their future.

We put in place plans for our public education in material resources and teacher training and capacity.

We had quickly adapted to the circumstances that the crisis had imposed on us because when we arrived, there was no plan.

Specials to the Autonomous University of Santo Domingo so that its students can have virtual education and save their semester.

We are investing more than 420 million pesos so that the tourism sector recovers as the engine that is creating jobs and the economy of our country.

In the infrastructure sector, we started planning to begin constructing the Ámbar highway from Santiago to Puerto Plata, also converting the port of Manzanillo into a large logistic operations and power generation center to create thousands of jobs.

Additionally, the project calls for three thousand hotel rooms in the tourist area of ​​Pedernales, always respecting our environment.

To boost the field, we placed 5000 million in credits for producers at a zero rate through the Agricultural Bank.

Economic reactivation and job creation require us to mobilize all investment instruments that are within our reach.

We have eliminated parallel structures, superfluous organizations, and surveying the entire government structure to see where they were wasting the Dominicans’ money.

Rest assured, no one will go unpunished if they have misused the people’s money. For this reason, we designate an independent Public Ministry whose procurator must act autonomously and only guided by the Constitution and the laws of the Republic. These actions mark a momentous change in our history.

We are just getting started and we have a long way to go.

We have started to take the first steps. And we are going to do it with you.

Because change is everyone’s task, it is a shared purpose and we all make the best team.

Thank you very much and God bless you.