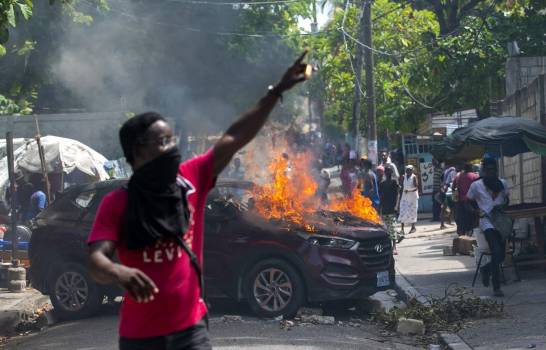 A protester holds a box of matches after setting fire to a government car during a protest demanding justice for a student who was shot to death by police a week earlier at a university during a mobilization for government teaching posts in Port-au-Prince, Haiti , on October 5, 2020. (AP Photo / Dieu Nalio Chery)

Haiti has registered an increase in violence in recent months, with gangs that challenge the State’s authority and political divisions that prevent legislative elections’ progress, the United Nations envoy to the country warned on Monday.

Before the UN Security Council, Helen La Lime painted a grim picture of life in Latin America’s most impoverished nation, noting that the country “is, once again, struggling to avoid the precipice of instability.”

Haiti has been affected by street protests and economic stagnation during much of Jovenal Moise’s presidency, which began in February 2017, as opposition leaders demand his departure. They say he has failed to manage the economy and did not prosecute years of unleashed corruption that diverted billions in international aid to bank accounts abroad.

His rivals failed, and Haiti’s parliament closed in January due to chaos, removing the grip on the presidential power that had paralyzed Moise for years. Now he governs by executive orders.

“In recent months, riots – sometimes in the form of violent protests – have become more and more frequent, and the perception of insecurity has become even more acute,” La Lime said.

“Gangs continue to challenge the authority of the state, especially in the most populated neighborhoods of Port-au-Prince,” he added. “And a fringe group of dissatisfied police officers calling themselves ‘Fantom 509’ has, along with their supporters, provoked disorder in the capital on several occasions.”

The key to free and inclusive elections lies in Haiti’s political and economic classes, whether they can compromise without resorting to violence and whether the country’s fledgling institutions can take the necessary measures to ensure a fair vote, he said.

Roberto Álvarez, Minister of Foreign Affairs of the Dominican Republic, told the Council that his country, which shares the island of Hispaniola with Haiti, “is very concerned about the large-scale social, economic, health and political crisis that is shaking the sister republic.”

The crisis is marked by the lack of a political agenda and “the fact that the organization of legislative elections is paralyzed,” said the foreign minister, adding that this “has worsened to such an extent that good governance is impossible.”

“Violence and impunity continue to cause devastation and continue to affect the proper functioning of daily life,” added Álvarez.

The Dominican minister recalled that his country warned the Security Council last year that its decision to withdraw the UN police training and monitoring mission as of October 15, 2019, was premature because “the appropriate conditions had not been met.”

The Security Council replaced the comprehensive peace mission deployed after the devastating earthquake in 2010 with the police mission in 2017. This was replaced by a smaller policy led by La Lime.