Abinader returns to the North with a work and development agenda 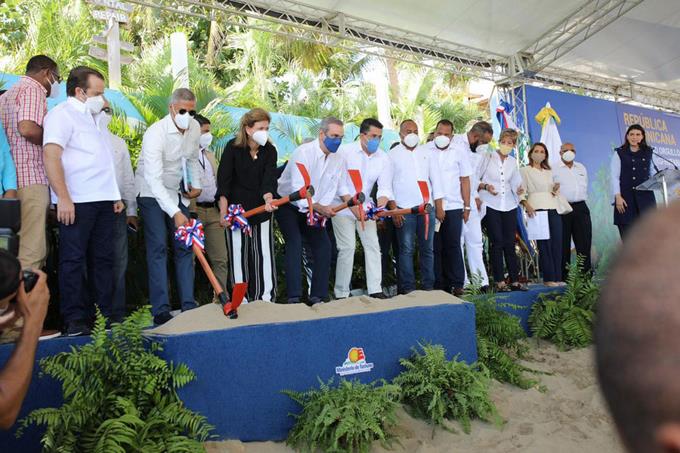 Luis Abinader, Raquel Peña and government officials at the start of a project.

President Luis Abinader’s work schedule is still full of work, now dominating with his visits to towns in the provinces, which this weekend took him to Santiago, Villa Altagracia, and Puerto Plata. He launched development plans and promised millionaires investments in the area.

The president started on Saturday in San José de las Matas, Santiago, with a simultaneous reforestation day that included Villa Altagracia and Puerto Plata, on the occasion of the month of reforestation.

Regarding this activity, the president declared that the plan “will be present throughout our administration.”

In Santiago’s particular case, yesterday was exactly one month after Abinader visited that province, where he exhausted a three-day schedule.

In the Botoncillo community of San José de las Matas, Abinader, together with Vice President Raquel Peña, the Minister of the Environment, Orlando Jorge Mera, the Senator of Santiago, Eduardo Estrella, other officials, and volunteers, planted pine plants.

“Today, we begin a great reforestation plan that will be present throughout our administration, and we visit the nursery, and we are also going to carry out various events in pursuit of that plan,” said Abinader.

He also declared that it is a very ambitious plan in which the entire Dominican population will be involved.

Arrival to the North coast

During his tour of Puerto Plata yesterday, Abinader reported that the government would disburse 48 million pesos to complete the municipal Puerto Plata market.

“The government has to be by your side, attending to this moment, preparing ourselves for recovery,” said the president, who also reported in a month the Recovery Plan for Sosúa, Cabarete, and Puerto Plata would be ready. It will be done via consensus between the areas of the tourism sector.

The president pointed out that this recovery is vital for the government to create jobs for these hard-working and entrepreneurial people, Puerto Plata.

When leaving Cabarete, the president moved to Sosúa, where he also had a meeting with tourist business people at the Casa Marina hotel.

The head of state said that it would be a “plan for ordering action and unity of criteria.”

“The time has come to develop the region; the Government is determined to take actions for the common good and sustainable development,” he assured. Abinader asked the mayor of Sosúa, Wilfredo Olivence, and other authorities in the province, an infrastructure plan to develop it in Sosúa.

On his side, the Minister of Tourism, David Collado, said that the Government does not turn its back on the country’s problems or Puerto Plata. “We have a prudent and serious government, and that is why President Abinader will recover Puerto Plata,” he said.

Environment Minister Orlando Jorge Mera said he is concerned about forest fires, which are undermining the forest.

He warned that measures would be applied to stop this situation.

Plan Sierra appreciated Abinader’s visit, and said it will restore the mountain area’s ability to conserve and expand natural resources.