Almost half the Dominican Republic on alert for possible floods 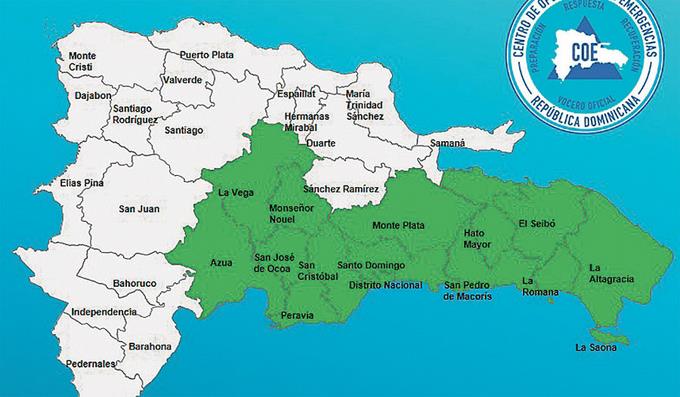 The meteorological reports indicate that a tropical wave persists, which interacts with an upper-atmospheric band of moisture. Both affect the weather conditions in the national territory, leaving behind precipitation accompanied by wind gusts, thunderstorms, and lightning.

Onamet detailed that the precipitations will be more frequent in the zones under alert as it predicted a rainy weekend.

The agency explained that the tropical wave moves over the central part of the Dominican territory, interacting with a trough that projects over the country’s southeast, so the meteorological conditions will remain under its influence in the eastern, northeastern, southeastern, central mountain range and border areas. This Saturday and Sunday, there will be dispersed cloudiness and some morning rains in the pre-dawn morning hours.

“In the afternoon, there will continue to be cloudy increases accompanied by moderate to heavy showers locally, with occasional thunderstorms and isolated gusts of wind, over the regions or provinces mentioned in the previous paragraph,” Onamet reported.

Today the tropical wave will be located in the south of Haiti. Humidity lagging along a weak trough to the south will generate local downpours with electrical storms and isolated wind gusts.

BERMUDA
East-Southeast.
A sizeable low-pressure area has a 80% chance of becoming a tropical cyclone in the next five days.